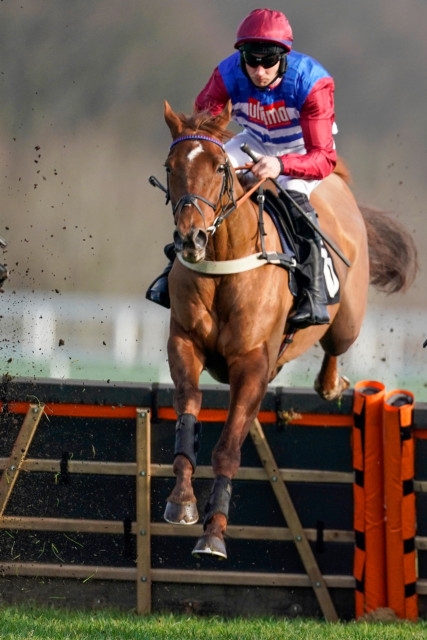 Classy Flat recruit Tritonic made a winning start to life as a hurdler at Ascot last month.

Tritonic made a winning hurdling debut at Ascot last month

He stayed on powerfully from the back of the last to win going away that day, earning a quote of 8-1 with Betway for the Triumph Hurdle.

And King is hoping he can book his ticket to the Cheltenham Festival with victory in the Grade 2 Adonis Juvenile Hurdle.

King said: “He was only just ready to start back at Ascot as we gave him a proper break at the end of the last Flat season.

“His jumping had been very good on the whole at Ascot. We’ve got a couple of schools into him since and Adrian (Heskin) has come in and had a sit on him.

“I’d like to think he will improve for that but he will need to as it looks a strong race. He’s in good form and we have been happy with him since Ascot.

“The track might be a bit on the sharp side but we need to get some match practice in if he is going to be going to Cheltenham and it was always the plan to come here as I didn’t want to go to Cheltenham with just the one run over hurdles.”

King also runs 16-1 shot Talkischeap in the £75k Close Brothers Handicap Chase at Kempton, and a good run this weekend could tee up at Grand National tilt in April.

He said: “We’ve given him a couple of spins on the all-weather as we needed to run him but we didn’t want to run him on that soft ground.

“The only Flat race I could find for him first time out was at Southwell and that wouldn’t have been ideal for him, but it gave him an away day and we got a good blow into him.

“Luckily they put on one of the jumpers’ bumper cards at Lingfield and I was very pleased with how he ran there.

“Those two races have really sharpened him up. He had a good school last week and the ground is coming in his favour.

“We need to get a chase into him to qualify for the Grand National as that is where his owner wants to go.”

Did you miss our previous article…
https://www.sportingexcitement.com/horse-racing/matt-chapman-on-the-future-for-jockeys-it-would-be-grave-mistake-for-racing-to-return-to-how-things-were-pre-covid