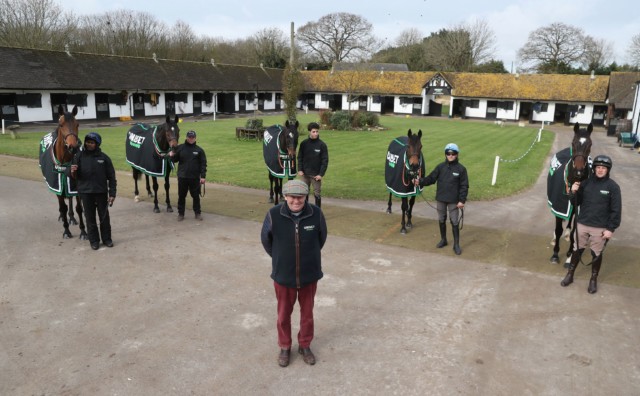 THE Cheltenham Festival is just 19 days away, and top trainer Nicky Henderson will once again have a top team ready to roll.

The three-time leading trainer at the Festival has provided the latest on his runners, including Gold Cup contenders Champ and Santini, and brilliant chaser Altior.

“It’s amazing how three or four weeks ago Shishkin was odds-on and everybody said the race was going to be boring. All of a sudden Willie (Mullins) has come along with Energumene!

“He’s been very good. I think his performance in the Supreme last year was very good because he was taken into the car park at the second last.

“He probably hasn’t had a lot of opposition over fences, but he’s been very clinical and very accurate. He’s in good form and proven he’s top class.

“He’s got a couple of bits of work to do before the Festival, but everything is on course.”

“We’ve always in the past used the Contenders’ Hurdle at Sandown with him, but I felt we were about a fortnight ahead (of schedule) so we went to Haydock.

“The ground that day was horrible and it just found him out. I thought we were going to get to the winner coming to the last but he just emptied a bit.

“It did him the world of good – I think people have forgotten about him.”

“She was very, very good in the Fighting Fifth, Christmas just didn’t go her way. Fair play to Silver Streak, he was very good.

“She looked wonderful at Newcastle. If we have her back to that level then she’ll have as good a chance as any.

“She was stiff after Kempton and had an operation on her back but she seems to be going very well at home.”

“She is in good form and she is also entered in the Champion Hurdle.

“We know she likes good ground, but when you look at the way she has been racing, especially on the flat when she was a good third in the Ebor, we think she could be suited by the extra half a mile in this.”

“She is in very good form and I’d say it’s very likely that we will go for the Mare’s Hurdle rather than the Chase.

“She showed last year when she won the Coral Cup that two-and-a-half miles in her trip and I think it is a good call to go for this.

“She is not ready for the Mares’ Chase, especially having fallen at Sandown last time, and JP McManus has the favourite anyway in Elimay.”

“He has never been an easy person. He has had one run over fences at Newbury, where he jumped well.

“He needs to back it up again, he may well run again before the Festival and he would probably need to.

“He is being primed for this and Derek O’Connor was going to ride him but obviously amateurs can’t ride now.”

“He couldn’t be better. I’m very, very happy and I think his whole demeanour is in a better place than any other time this year.

“It hasn’t been easy and having looked invincible, luck hasn’t gone his way.

“He raced very lazily and lacked his usual and sharpness and accuracy at Kempton over Christmas.

“One has to remember he is 11-years-old now but he has done very little wrong.

“It would be very special if he could win, he has been an amazing horse. I wouldn’t rule out he could wear cheekpieces for the first-time on the day.” 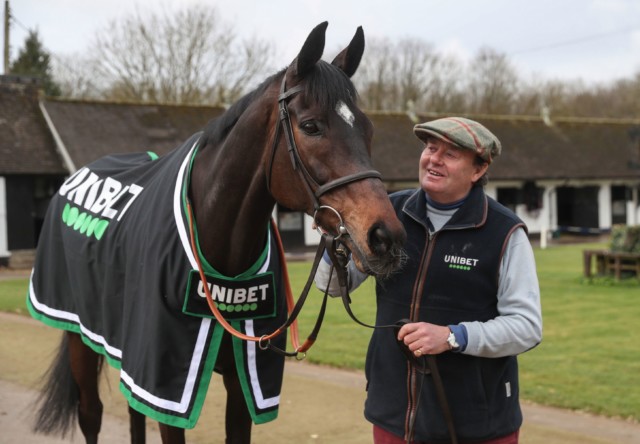 Altior is unbeaten in four starts at the Cheltenham Festival

“I was very pleased with him at Wetherby the other day. He won first time out at Ascot, and if we go back 12 months he was a very good third in the Supreme.

“We always felt he needed further, and his performance first time out at Ascot was very good and he won well. We went to Cheltenham and he was very disappointing. He completely forgot how to jump.

“He has since had a bit of surgery on his back. His run at Wetherby was eight weeks after his operation.

“He jumped beautifully and travelled well on horrible ground. He would prefer better ground – the only problem is Envoi Allen!”

“I absolutely adore him, he is a wonderful character of a horse.

“He has done nothing wrong all season. We purposely gave him a break as he goes well fresh.

“He is fit and well. Normally I’d say my two have a great chance, but Envoi Allen appears to be the Irish banker.” 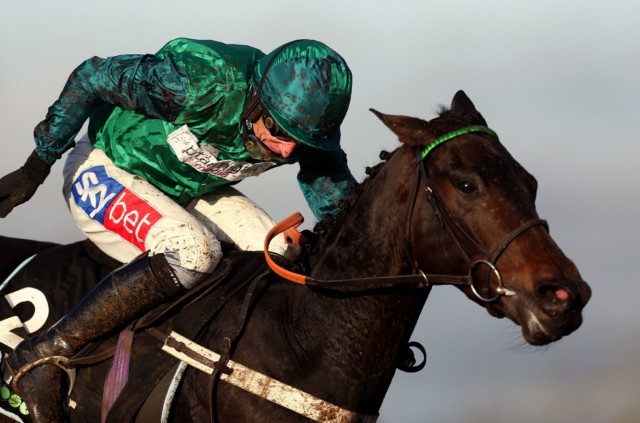 Fusil Raffles is a lively outsider for the Marsh Novices’ Chase

“So we brought him back over hurdles for a couple of runs. He went to Haydock the other day for the last Pertemps qualifier and he ran a very good second.

“He stayed on very well and travelled well. He didn’t wear cheekpieces at Haydock, but he can hit a flat spot and I suspect they might come back on for this.”

“I like to think he has got a very good shout in this. He worked well with Altior this week, his jumping has been very good.

“He won the Peterborough which was switched to Cheltenham from Huntingdon. He is one who would like good ground.

“If he gets some decent ground he will be very competitive. He is a lovely horse, he has a great temperament and attitude.”

Not a bad season for Champ:

This performance is still as remarkable as the first time we saw [email protected] @BarryJGeraghty #Starsoftheseason pic.twitter.com/g7Klt2RYpL

“His RSA win was an extraordinary performance. I was focusing on those up front and then he came back into sight and swept past them.

“If Newbury was held on the original weekend, he would have run in the Denman. But with it being a week closer to Cheltenham we chose to run in the Game Spirit because we didn’t want him to have a hard race over three miles first time out.

“His jumping at Newbury was exceptional, we all came away very happy and he has come back fine. Nico (De Boinville) will ride him.”

“He has had a difficult season. We started off at Aintree which ended up being a near Flat race when they took all the fences out.

“We had no intention of running him in the King George because it’s not his track, but I didn’t want there to be too much of a gap between races as he loves his racing.

“Not surprisingly he found Kempton sharper than ideal. The Cotswold was off at Cheltenham and it was moved to Sandown, where the ground was desperate.

“He was great in the Gold Cup last year, and I don’t see any reason why he wouldn’t come back and run just as well.”