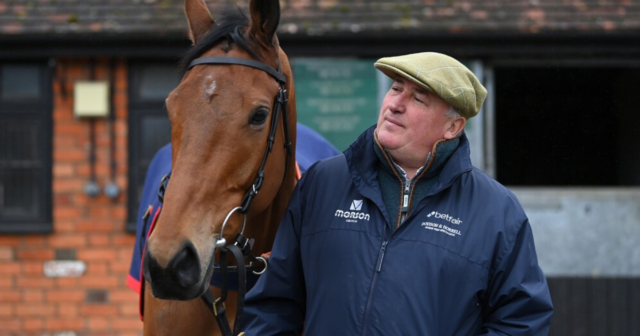 The exciting novice chaser is among the leading British-trained runners heading for the Cheltenham Festival.

Nicholls and Bravemansgame at his yard on Thursday morning

He is a perfect 4-4 over fences this season and he is a top-price 2-1 with Coral for the Brown Advisory Novices’ Chase.

The 12-time champion trainer Nicholls has compared Bravemansgame to legendary Gold Cup winner Denman in the past.

And if he can preserve his unblemished chasing record at Cheltenham on March 16, Nicholls sees no reason why he can’t go on to emulate the great horse.

Nicholls said: “He is a fantastic looking horse that has done everything right. We got put in our place last year by Bob Olinger well and truly but he still ran well.

“He was quite weak and still a shell but he has improved enormously for a summer at grass this season. I think he will be even better next season when he is even stronger.

“He has won four from four. He won that handicap very nicely at Newbury the other day and is rated 164 which is a high mark for a novice.

“He does everything nicely. He jumps well, relaxes nicely and has plenty of speed. He is a super horse.

“He doesn’t take a lot of training – we just let him tick over. We had to go somewhere for a run as season we didn’t run him between Newbury and Cheltenham. I’ve always used that Newbury meeting for those good horses as a prep run.

“He has got class and he jumps. A lot of horses can be big and good but if they don’t jump fences they never fulfil their potential. If you can jump like him then they have got a chance of fulfilling their potential.

“I’d like to think next season he would be a serious contender for the King George and Gold Cup. He is a lovely horse and has a lovely chance next week.”

It remains to be seen who will be lining up against Bravemansgame at the Festival, with one-time big rival Galopin Des Champs now seemingly on course for the Turners Novices’ Chase.

Nicholls continued: “No one knows what is going to turn up and run until the declarations and the ground – he will run in the three mile race unless it was attritional.

“You can only beat what you are up against and if the good ones turn up it will be an interesting race. I think you are always nervous (if a horse like Galopin Des Champs turns up) but we are going into the meeting with a stronger horse than last year.

“Harry (Cobden, jockey) said he would be better with a lead as he doesn’t do much in front but he is dead straight forward really.

“I think he is rated higher than when Denman won this race as he was 161 and this lad is 164 already. There are a lot of similarities in what they have done but you can’t compare generations.

“He has certainly gone the right way. Denman never had as much boot as him as he was an out and out galloper but he has got plenty of speed and jumps well.

“He is very relaxed and is a lovely horse that has a lot of class. For a big horse in our school he is electric. He enjoys everything and he is a pleasure to train.”

In this article:cheltenhamfestival, heis, theworld