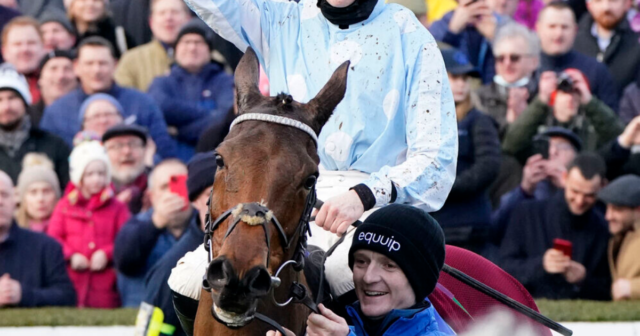 PADDY POWER have unveiled a whopping 45-1 Cheltenham Festival acca – made up entirely of favourites.

Punters can back the four-fold now non-runner no bet.

That means should any of the horses not run then you won’t lose cash on that selection.

The four-fold is made up of horses running in the four championship races.

First up is the unstoppable mare Honeysuckle, who is as short as 4-7 to defend her Champion Hurdle crown.

CHECK OUT THE 45-1 ACCA ON PADDY POWER

Henry De Bromhead’s stable superstar made it 14 from 14 with an easy win at Leopardstown on Sunday.

Next up is Shishkin at the same odds in the Champion Chase.

In the Stayers’ Hurdle, Paddy Power have installed defending champion Flooring Porter as the 10-3 favourite.

Flooring Porter was beaten by Willie Mullins’ Klassical Dream at Leopardstown over Christmas.

But that horse stole a lead on the others and was subsequently put in his place when soundly beaten by Royal Kahala at Gowran Park last month.

The final leg of the acca is A Plus Tard in the Gold Cup.

At current odds of 10-3, A Plus Tard – whose name translates from French as ‘see you later’ – is just ahead of 7-2 second fav Minella Indo.

The former finished runner-up to the latter in last year’s race, and this year’s renewal looks set to be a cracker.

You can back a single, double, treble or four-fold with Paddy Power.

Stick a tenner on the four-fold win only and, if they all win, you will net £450 – any losers and the bet is a goner.