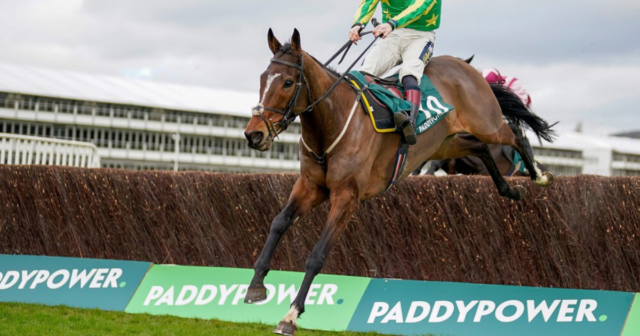 CHELTENHAM Trials day gave us some good clues for the Festival and a couple of really impressive performances.

PIED PIPER led them all home like his fairytale namesake. You don’t see many Prestbury Park Grade 2s won with the jockey sat motionless to the line but Davy Russell did just that.

Templegate was taken by Torn And Frayed’s Cheltenham Trials win

Trainer Gordon Elliott now has the nice problem of having two great chances for the Triumph Hurdle and they both run in the same colours.

There was some talk of Pied Piper going for the Supreme Novices’ Hurdle after this but, as impressive as this display was, it was short of what we’ve seen from the likes of Constitution Hill, Jonbon and Dysart Dynamo.

Fil D’Or and Willie Mullins’ Triumph hope Vauban are set to clash at the Dublin Racing Festival on Saturday and that will tell us plenty.

For now, Pied Piper is the pick of the Elliott pair for me but the Irish Champion Trainer has yet to play his hand.

The second eyecatcher on Saturday was TORN AND FRAYED who won the Grade 3 chase by six lengths.

He is building up a nice run of Cheltenham form now given his second behind My Drogo in December and close-up third on his chasing debut last year.

He came into the race having been pulled up on horrible ground at Haydock and these better conditions suited perfectly. His jumping late on was fantastic and he bounded up the hill with lots more to give.

Trainers don’t normally want their horses to go up the handicap but he needs to be a few pounds higher to be sure of a run in the Paddy Power Plate on Thursday.

Hopefully he gets in because he’s a cracking price if you can still get the bit of 14-1 about.

With many bookies now going non-runner, no bet he’s worth an interest because there’s more to come.

NO GOLD FOR CHANTRY

CHANTRY HOUSE managed to scramble home in the Grade 2 Cotswold Chase but I don’t think much of his Gold Cup chances.

He jumped sketchily early on and ground it out in the closing stages, swishing his tail in the process.

I wouldn’t be sure he’ll even be back for Festival Friday and 16-1 looks a little skinny.

There will be loads of pace on in the big race and he’s likely to be left behind as he was in the King George on Boxing Day.

SANTINI was the one to take out of the race for me. It looks like a real test of stamina is what he needs given the way he kept galloping up the hill.

He’s as long as 66-1 for the Gold Cup and if there’s a match bet available between him and Chantry House on the big day, I’d be siding with Polly Gundry’s runner.

Santini is 50-1 for the Grand National and I’ve blown the dust off my wallet and had a couple of quid at that price just in case he turns up there instead of the Gold Cup.