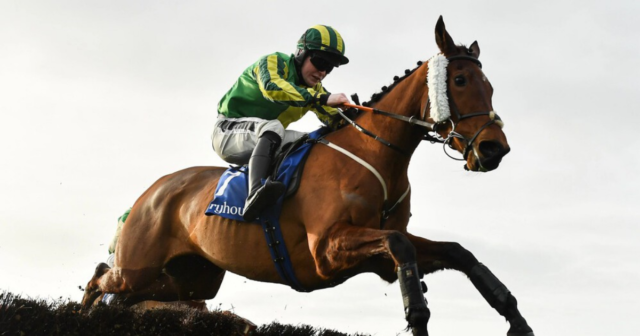 TEMPLEGATE takes on the Cheltenham Festival ante post markets with his latest column.

He takes a close look at the intriguing Supreme Novice Hurdle betting.

And ventures over the Irish Sea to pick out one recent winner who could strike again come March.

CONSTITUTION HILL has become the big British hope for Cheltenham after his impressive Tolworth Hurdle win at Sandown on Saturday.

To take a Grade 1 by 12 lengths and show an impressive turn of foot in heavy ground surely makes him the real deal.

The victory saw him surge past stablemate Jonbon to be favourite for the Supreme Novices’ Hurdle with 9-4 the best you’ll get now.

There seems little point in taking that price because he can’t get much shorter and may even drift a bit should Jonbon or third best Sir Gerhard perform well this side of the Festival.

Nicky Henderson says Constitution Hill is unlikely to run again before March so we won’t get an answer to the one remaining question about the five-year-old.

That’s whether he can repeat his two impressive efforts in quicker conditions.

Heavy ground at Sandown can exaggerate winning margins and it would be nice to see him go on something a bit quicker.

Jonbon can tick that box thanks to his impressive Grade 2 effort at Ascot last time in conditions closer to what we would expect at Cheltenham in March.

He’s going to have another run at Haydock next week which could make the Festival picture a little clearer.

There’s also a chance that Henderson will put one of them in the Ballymore over further to keep them apart – but which one?

Given the ground was bottomless at Sandown, there may be more Festival clues from Sunday’s Fairyhouse card.

The first race of the day for four-year-old hurdlers has a good strike-rate of finding the Boodles Fred Winter winner with two of the past four having scored after running in this.

Winner WHITE PEPPER earned a quote of 20-1 for the Festival after an easy enough success. She jumps really well and has already been placed in good company at Aintree.

Britzka was favourite for the Fred Winter before finishing fourth here but is still shorter for Cheltenham. I know which one I’d be having a small each-way interest in at this stage.

Advised: White Pepper each way at 20-1 in the Boodles