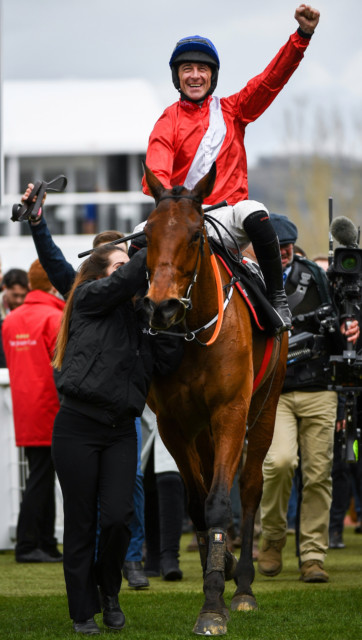 BOOKIES reckon two horses above all others are primed to absolutely demolish their rivals at Cheltenham Festival.

Envoi Allen and Shishkin are both 14-1 favourites to record the biggest margin of victory in any race.

Will anything be able to stop Envoi Allen at Cheltenham?

The superstar duo are already odds on to win their respective contests.

Envoi Allen is a general 8-11 shot in the Marsh Chase on the Thursday of Festival week, while Shishkin is 4-5 for the Arkle on Tuesday, March 16.

Coral’s Harry Aitkenhead said: “We’re betting on which horse will not only win at Cheltenham next month but win by the furthest.

“It is Envoi Allen and Shishkin who top the market and are the two which we think could be the stars of the week.”

Gordon Elliott’s Envoi Allen is unbeaten in an 11-race career while Nicky Henderson’s Shishkin has not tasted defeat since falling at Newbury in December 2019.

The Willie Mullins-trained Chacun Pour Soi – a 4-6 shot in the Champion Chase – is second favourite in the betting for biggest winning distance at 16-1.

SunSport tipster Templegate recently ranked the Festival’s top favourites – and named a runner he thinks can take them on.

Meanwhile, SunSport has revealed Patrick Mullins is considering turning pro after amateur riders were barred from the Festival.

The Irish ace – son of trainer Willie and with four Festival winners to his name – would miss the likes of Champion Bumper favourite Kilcruit and Champion Hurdle hope Sharjah by not making the switch.

“There’s some serious thinking to be done.

“It’s only three weeks until Cheltenham and we’ll have to give it some serious thought.”