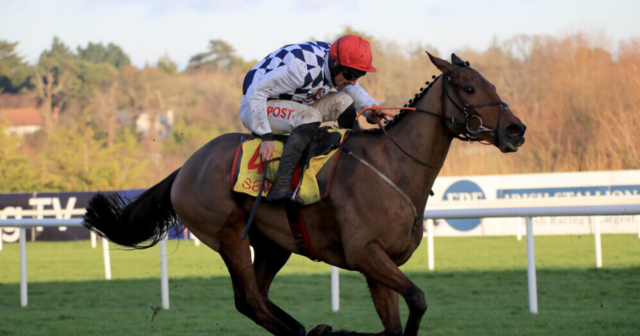 GORDON Elliot returns to the Cheltenham for the first time since 2020 with a typically strong team.

Elliott was absent from last year’s festival due to his much-publicised six-month suspension, with horses from his yard running instead for Denise Foster.

With his troubles now in the rear-view mirror, Elliott is taking dead aim at another fruitful Chetenham Festival – a meeting he has regularly plundered over the last decade.

Elliott is a trainer who values each and every race at the festival and it is always worth looking out for who he aims at the handicaps.

However, he still boasts a supremely strong hand in the Graded races, with several favourites and short-priced contenders for some of the meeting’s biggest races.

In three runs over fences Fury Road has emerged as a top-class novice chaser and maybe one with the credentials to win at the Cheltenham Festival.

He took his form to another level at Leopardstown over Christmas, reversing Drinmore form with Beacon Edge and putting eight lengths between himself and Run Wild Fred in the Grade 1 Neville Hotels Novices Chase.

His jumping is slick, he travels well and has shown excellent form at Cheltenham form before – when just a neck third to Monkfish in the 2020 Albert Bartlett.

Galopin Des Champs and Bravemansgame lead the market for the Brown Advisory and are serious adversaries but Fury Road is very much in the mix.

This big-money purchase out of the point-to-point field has already established himself as the favourite for this year’s Champion Bumper – a race his trainer last won with Envoi Allen in 2019.

After making a winning debut at Down Royal in October, American Mike romped home in a Listed bumper at Navan just before Christmas.

That was the same race won by both Envoi Allen and Sir Gerhard – when both were trained by Elliott – the year they won the Champion Bumper meaning this a road with which the trainer is familiar.

This year’s bumper looks strong, with Willie Mullins set to saddle at least two leading contenders, but none look stronger at present than American Mike.

Another hugely talented horse owned by the ever more powerful Bective Stud, Ginto is moulding into a serious novice hurdler for the Elliott team.

Unbeaten in three starts over hurdles, his form has gradually improved with each and peaked at Naas ealier this month with a resounding success in the Grade 1 Lawlor’s Of Naas Novice Hurdle.

That race was over 2m4f – the same trip as the Ballymore – and it was the way that Ginto asserted himself in the closing stages that really caught the eye.

With that in mind, Elliott must be considering stepping him up to three miles at the festival for the Albert Bartlett.

In the end though, whichever direction connections choose to go this March, Ginto is going to be a force to be reckoned with.

Fil Dor has been the best juvenile hurdler in Britain or Ireland in the first half of this season and it hasn’t really been close.

That reality is reflected in the Triumph Hurdle betting, where the 3/1 favourite’s nearest rival is priced at 8/1 in what is market that clearly yet to fully contract.

That said, Fil Dor has been dominant and put the cherry on an excellent first half of the season with a resounding Grade 1 victory at Leopardstown over Christmas.

It’s impossible not be impressed with what he’s done so far and unless something comes out of the woodwork soon he will be short odds to land a third Triumph for his trainer.

Galvin has been one of the surprises of the season and could well end up defying even the loftiest expectations.

After opening the season with a win at Punchestown, Galvin was revealed to be his trainer’s leading Grand National hope for this season.

But in two Grade 1 starts since he has revealed himself to be capable of dining at the very top table of staying chasers.

Second to Frodon at Down Royal, he then went and beat Gold Cup favourite A Plus Tard in the Savills Chase at Leopardstown over Christmas – a performance which transformed what many though his ceiling could be.

Now 5/1 for the Gold Cup and already a festival winner (last season National Hunt Chase), he’s firmly in the mix for the meeting’s blue-riband race.