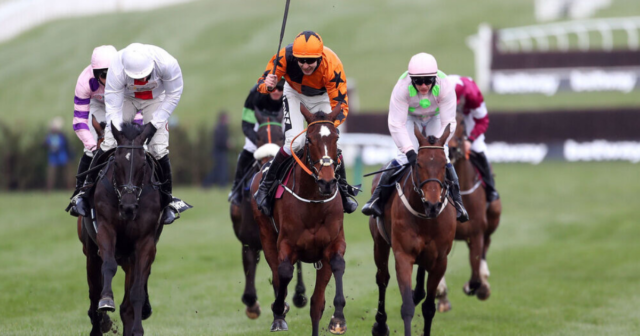 TOP trainer Henry de Bromhead is toying with the idea of stepping Champion Chase winner Put The Kettle On up in distance.

The seven-year-old mare was flat to the boards throughout when a distant third behind Nube Negra in the Shloer Chase at Cheltenham earlier this month.

She ended up staying on strongly into third place but was ten and a half lengths behind the winner and nearly five lengths off the runner-up Politologue.

Her odds for the Champion Chase in March were eased out slightly to 12-1 by Coral as a result of her defeat.

And her trainer reckons she may be in need of a stiffer test of stamina as she gets older.

De Bromhead told the Racing Post: “She stayed on well at Cheltenham and I thought it was a similar run to last year when she won the Shloer.

“It was just that the ground was a lot softer in 2020 and that gave her a chance to come back at them.

“She seems good since. Having discussed it with everyone, I’d say we’ll step her up in trip and try her in the mares’ chase at Fairyhouse on New Year’s Day.

“We’ll see how it all unfolds but it’s not certain that she’ll try to defend her Champion Chase crown.

“She’ll probably have a few entries. Obviously there’s the Mares’ Chase and the Ryanair Chase.

“I’d say she’ll be entered for all of those and we’ll see nearer the time.

“She seems like a different lady in the spring as well and we’ll look at what the ground is then too.”

In the more immediate future, de Bromhead is confident that his reigning Champion Hurdler Honeysuckle can make a winning return in the Hatton’s Grace Hurdle at Fairyhouse on Sunday.

The mare will face the likes of Klassical Dream and Saldier in the Grade 1 contest as she bids to keep her unbeaten record intact.

De Bromhead said: “She seems in great form. Rachael schooled her the other day and is happy with her.

“She has won this race the last two years and it’s the perfect starting point in her season.”

Honeysuckle is 4-7 with Paddy Power to win the Hatton’s Grace for the third year in a row, with Klassical Dream next best at 3-1.