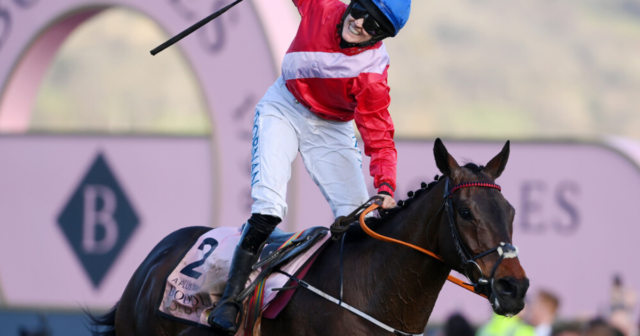 THE Cheltenham Festival proved a life-changing event for one genius punter, who turned £20 into a colossal £56k despite one of his selections falling at the last hurdle!

Before the festival began, the William Hill customer placed £10 each way on a nine-fold accumulator at odds of 6,777.

However, William Hill stretched those odds to 10,166 with their Bet Boost feature – which eventually scooped our lucky punter an extra £18,827!

It couldn’t have started better as Edwardstone and Stattler both secured emphatic wins on the opening day.

But there’s a twist.

Galopin des Champs was the next selection in the Brown Advisory Novices’ Chase at 2.10pm.

However – that horse was switched to the Turners Novices’ Chase on Thursday instead and voided as a non runner on the slip.

And that might have been a real stroke of good fortune as Galopin des Champs, with the race at his mercy, fell at the last when streaks ahead of Bob Olinger.

Facile Vega’s win in the Champion Bumper ensured that all four of the punter’s selections had won with four left to run.

Allaho, Flooring Porter and Vauban all ran in on Thursday and Friday, leaving the better needing A Plus Tard to win the Cheltenham Gold Cup for £56k!

But he needn’t have worried.

Rachael Blackmore created history as the first female rider to win the Gold Cup, flying past Minella Indo to bolt up by 15 lengths!

In this article:cheltenhamfestival, forone, williamhill