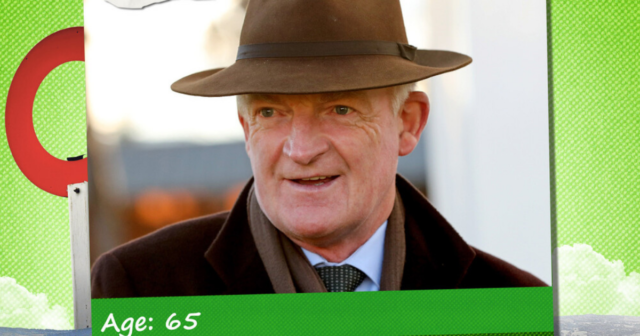 WILLIE MULLINS has been leading trainer at the Cheltenham Festival EIGHT times since 2011 – and he will return with a strong squad again this year.

The master of Closutton is a genius at getting his horses to peak on the big day at Cheltenham and his runners always need a close look.

He is strong in every department, be it novice hurdlers and chasers, staying hurdlers or top two-mile chasers.

He will have a plan for the 2022 Festival meticulously mapped out, and he is a leading contender to finish as top trainer again.

Here, we count down Mullins’ top five horses for this year’s Cheltenham Festival.

The ten-year-old needs no introduction, having bagged back-to-back Gold Cups in 2019 and 2020.

He came up a little short behind Minella Indo and A Plus Tard last season, though he was a very creditable third under Paul Townend.

He blew away the cobwebs on his annual visit to Tramore on New Year’s Day, winning easily at odds of 1-6 for all his jumping was a little sticky in places.

But he is a horse who comes alive in the spring time and we know how much he loves it around Cheltenham. He is far from a spent force and is surely an each-way bet to nothing at double figure odds.

He announced himself on the big stage with a hugely impressive front-running victory in the Moscow Flyer Novices’ Hurdle.

Now unbeaten in four starts, the six-year-old barely came out of second gear when thumping a good field by 19 lengths.

He has the option of running over two miles at Cheltenham in the Supreme, but he is shorter in a few places for the Ballymore over 2m5f.

Whichever race Willie decides to target, the promising youngster clearly has a big engine and will be a leading player wherever he turns up.

The 2019 Supreme Novices’ hero has got his career back on track over the past 12 months.

He has been a revelation since stepping up to three miles, winning impressively at Punchestown last spring before winning the Christmas Hurdle on his return in December.

He beat last year’s Stayers’ Hurdle winner Flooring Porter on that occasion, and that rival had the benefit of a run (for all he was a late faller).

He still has plenty of untapped potential over staying trips, and was a dominant winner on his only previous visit to Cheltenham.

Willie Mullins has never won the Champion Chase, but Energumene has a big chance at breaking his duck.

He is unbeaten over fences so far, winning each of his five starts, and he made light work of his opposition at Cork in December.

It remains to be seen if he will handle the track at Cheltenham, but he has won going left-handed in the past.

He could be on course for a mouthwatering clash with Shishkin at Ascot this weekend, so expect a big shake-up in the betting for the Champion Chase.

Already a Festival winner, Galopin Des Champs is one of the most exciting young horses set to compete at Cheltenham this year.

He was a runaway winner of the Martin Pipe Handicap Hurdle last term and ended his campaign with victory in a Grade 1 at Punchestown.

He made a huge impression on his chasing debut over Christmas, jumping well and strolling 22 lengths clear for a jaw-dropping victory.

Bravemansgame is the biggest danger in this division, but he isn’t even certain to run at Cheltenham. Galopin looks banker material.

Second to Frodon at Down Royal, he then went and beat Gold Cup favourite A Plus Tard in the Savills Chase at Leopardstown over Christmas – a performance which transformed what many thought his ceiling could be.

Now 5/1 for the Gold Cup and already a festival winner (last season’s National Hunt Chase), he’s firmly in the mix for the meeting’s blue-riband race.