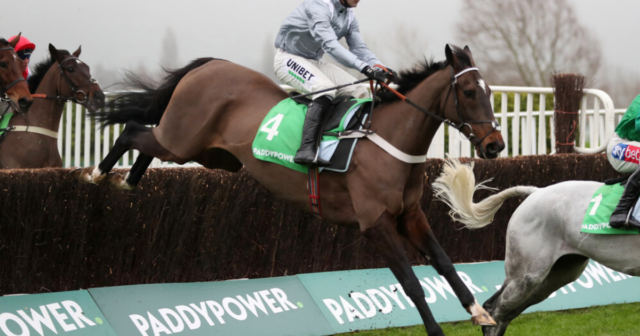 SANTINI has left Nicky Henderson’s yard and will continue his career with ‘incredibly excited’ trainer Polly Gundry in a shock switch.

The 2020 Cheltenham Gold Cup runner-up was short of his best in four starts last season and owner-breeder Richard Kelvin Hughes felt the horse would benefit from a change of scenery.

Grade 1 winner Santini will continue his career with Polly Gundry

It is a blow for six-time champion trainer Henderson ahead of the new jumps season but a huge opportunity for Gundry, who trains a string of just eight horses in Devon.

She has saddled 41 winners under Rules since starting out 15 years ago, and Grade 1 winner Santini is comfortably the best horse she has trained.

The giant nine-year-old was beaten a neck by Al Boum Photo in the 2020 Gold Cup and was a narrow second in the RSA Chase the previous season.

And Gundry confirmed a return to the Cheltenham Festival in March is the ultimate aim again.

She said: “I’ve had some nice horses over the years but absolutely nothing of his calibre, especially as he is a fit and healthy horse.

“I couldn’t sleep for four or five nights after the decision was made as it’s a huge responsibility – but then I thought sod it, I’m going to enjoy it.

“I ride him out every day, he is a lovely big horse and easy to deal with – we are incredibly excited to have him. It’s huge for a yard our size.

“I’ve looked through the programme book and it is pretty frightening looking at all the top races! The only issue is there aren’t that many options.

“I don’t want to run him in a handicap under a big weight so the Ladbrokes Trophy is unlikely. We will take our time before making our minds up.

“He was only just beaten in the Gold Cup last year so his season will be geared towards that race again.”

The news may have been unexpected for Gundry, but she is already very familiar with the horse having educated him as a youngster.

She continued: “We broke him in as a young horse and he would sometimes come to us on his holidays.

“His owners felt he had a hard enough time of things last year, so they made the decision that he would stay with me at the end of his break.

“We will take him hunting and make sure he is having fun. I want him to be happy off the track so that he is happy and confident on it.”