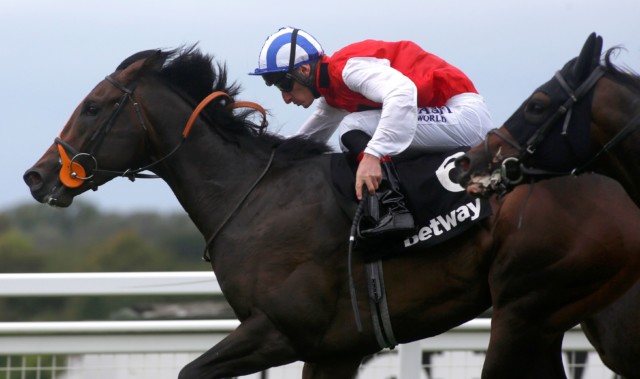 CLIVE Cox is all systems go towards a shot at Royal Ascot glory with his two stable stars.

Positive will skip the 2000 Guineas and head straight to the Group 1 St James’s Palace and Golden Horde is in line for the Commonwealth Cup.

Both were impressive juveniles for the Lambourn handler, but Cox expects his duo to improve this season and be capable of competing at the top table.

Cox told Sun Racing: “The timescale between the Guineas and Royal Ascot just would not have worked so we’ll put all our focus on the St James’s Palace Stakes.

“There’s been no setback or anything, in fact he’s in excellent form, we just think now that racing is back on that that route will work better for him. It’s all systems go.

“It’s only a couple of weeks away now so we won’t need to do much with him in the meantime.

“His form last year was very impressive, with a defeat to Pinatubo, albeit by five lengths, strong. He’s matured a lot and strengthened up very pleasingly.”

Solario Stakes winner Positive had been around a 25-1 shot for the first Classic, but will join Richard Hannon’s Threat in skipping Newmarket to head straight to Ascot.

Meanwhile Golden Horde will also be Ascot-bound with Cox’s sprint king 10-1 for the Commonwealth Cup with Paddy Power.

Cox said: “Golden Horde will also go straight to Ascot. Any prep race before the Commonwealth Cup and he would have had to have carried a penalty for his Group 2 win.

“He’s training well too and we’re similarly impressed with how he’s developed. The race there should suit him on a stiff six and we’re looking forward to it.”

Cox is no stranger to success at the Royal Meeting with Heartache, Profitable and My Dream Boat all winning at the Berkshire track in recent years.