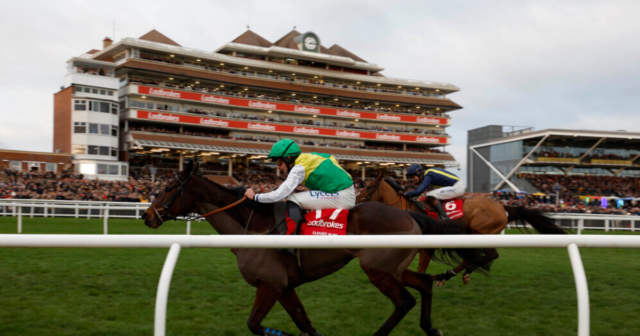 CLOUDY Glen may have had help from on high as he clung on for a dramatic Ladbrokes Trophy win.

The late owner will have been wearing his familiar grin as looked down on Newbury – and there was plenty of emotion in the winners’ enclosure from his nearest and dearest.

But the victory itself was greeted with stunned silence from the packed grandstands as the 33-1 shot caused a massive shock under jubilant jock Charlie Deutsch.

The Venetia Williams-trained outsider took over from fellow-Hemmings runner and defending champ Cloth Cap on the sweeping turn for home.

He immediately faced a strong-looking challenge from the promising Remastered, but David Pipe’s runner crashed out at the fourth last.

That left Cloudy Glen in splendid isolation, but only briefly as Fiddlerontheroof began to eat into his lead with two to jump.

Jockey Brendan Powell got a fine tune out of the 9-2 second-favourite and had the leader in his sights over the last – but Cloudy Glen battled hard and held on by half a length.

Williams said: “Trevor was up there watching. To have his two horses making the running in the Ladbrokes Trophy turning for home, it’s unbelievable.

“He was a wonderful man and apart from anything else he had the loveliest, wickedest sense of humour.

“He understood horses and he knew you had to be patient. In his business he was really on it but with his horses he was so patient and knew what it took.”

She continued: “Cloudy has always been a bit of a weird one, he has plenty of quirks and is a real character.

“He will probably want to be out partying with us tonight – he’s that sort of personality!”

It was a huge result for Deutsch, whose career threatened to go off the rails three years ago.

He was jailed for 10 months back in 2018 for dangerous driving while over the limit – but his boss Williams has stuck by him throughout.

He grinned: “I can’t believe it – this is huge for me and to do it in such distinguished colours is so special.

“We turned in and we were going so well, we just needed to keep going and he’s done that.

“This is just the best – I’m so thankful to Venetia for her support and to everyone who has backed me.

“He’s a funny little horse, he’s very quirky but he has such a good attitude. Venetia’s an absolute genius.”

Up at Newcastle, Epatante and Not So Sleepy shared the Fighting Fifth spoils after a ding-dong battle through a driving blizzard.

There were concerns the big meeting could be abandoned as snow and gales battered the track.

But those hardy punters who braved the elements were rewarded with a belting finish to the Grade 1.

Former Champion Hurdler Epatante looked to be coming with a winning run after the last, but Not So Sleepy rallied to force a dead-heat, with Sceau Royal a close third.

Nicky Henderson said of Epatante: “She has run a great race. From what I could see, her jumping was fantastic and that was her biggest weapon.

“That is what she had lost last year and she hurdled beautifully all the way and if she got up, we’d be grateful – we’ll take anything.

“It will be the Christmas Hurdle at Kempton next – no doubt about that.”

And Not So Sleepy’s trainer Hughie Morrison said: “What a horse. He won as a two-year-old on the Flat and here he is winning a Grade 1 coming into his 10th year.

“That is my first Grade 1 National Hunt win so I think it calls for a bit of a celebration.”