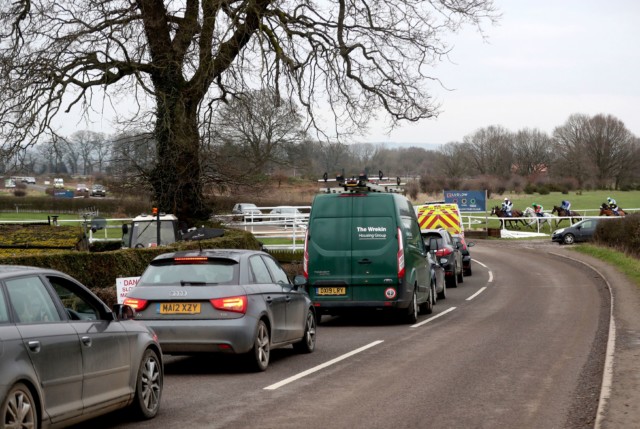 ONE motorists’ hunt for a bargain took a wrong turn on Sunday as he ended up crashing the behind closed doors fixture at Sedgefield.

The male followed a jockey on to the course, wrongly thinking that the Sunday car boot had restarted.

Cars wait for a race to finish at Ludlow Racecourse

The car made its way down to nearby the pre-parade ring just before the second race was about to get underway.

Racecourse security were soon on the case and managed to stop the red hatchback with another passenger on board.

Realising his error, the driver attempted to make a swift exit but was quickly spoken to by officials.

Thankfully the car was able to leave without causing any harm or coming into contact with any participants.

The pair were able to leave through the main gate which is kept open so that ambulances have access at all times.

Sedgefield general manager Emma White told the Racing Post: “They followed a jockey’s car in and thought the car boot sale was back on.

“It’s normally here on a Sunday and very popular with everyone in the area, all ages – but it’s not been staged since lockdown.

“There were no security issues.”

Owners and crowds remain banned from racecourses as lockdown continues in Britain.

It’s hoped that owners may return at the end of this month with limited crowds pencilled in to return from May.

Did you miss our previous article…
https://www.sportingexcitement.com/2021/03/08/matts-monday-yeeehaa-oisin-murphy-is-back-from-cocaine-ban-on-friday-and-our-man-reckons-hell-be-better-than-ever/