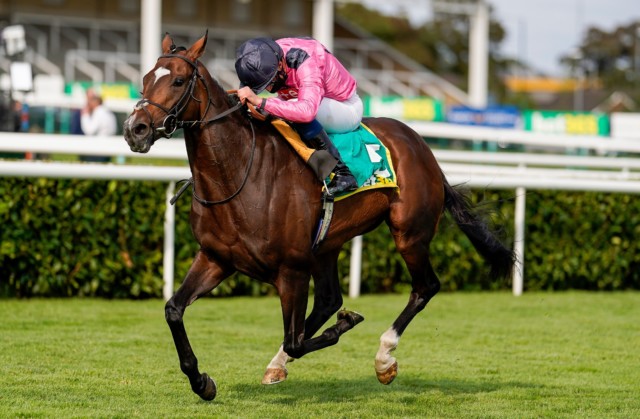 SPANISH Mission was in a league of his own as he bagged the Doncaster Cup on Friday.

Andrew Balding’s four-year-old said ‘adios’ to his rivals at the two-furlong pole and put the race to bed in a matter of strides.

It was a significant win for the colt, who had appeared a suspect stayer at 2m in the past.

But he is now 2-2 since moving to Balding’s from David Simcock, and this victory opens up all sorts of doors going forwards.

The Grand Visir (10-1) tried to make it a true test of stamina over the unique 2m2f trip, but 6-4 favourite Spanish Mission was always travelling kindly under William Buick.

He loomed up just over two furlongs out and unleashed the weapon his opposition were severely lacking – a change of gear.

He was three lengths clear of Selino (12-1) at the line, with The Grand Visir plugging on for a distant third.

Earlier on the card, Ubettabelieveit caused a huge 40-1 shock in the Group 2 Flying Childers.

The Nigel Tinkler-trained speedster stormed home late to catch the favourite Sacred in the final strides.

Tinkler said: “He showed how good he was in the National Stakes at Sandown – he’s a very, very good horse.

“Last time, I probably shouldn’t have run him over six there. He ran too keen, and the ground was horrific.

“Everything went wrong, but luckily Oisin Murphy looked after him. But he’s a very good horse, and I don’t often say that.

“How he was 40-1 – it was probably because I trained him! National Stakes winner, 40-1 for this, unbelievable.

“You’re always wondering at this time of year, quite a long season – ‘is it too late in the year’?

“But he was working well, and this is brilliant. He was given a fantastic ride by the jockey.”