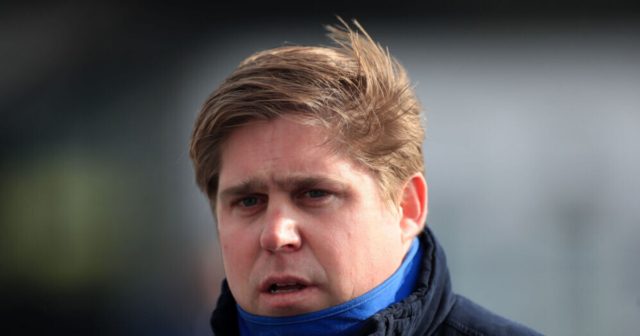 It’s been quality over quantity in recent years for the trainer but he managed to help brother Harry to become Champion Jockey for the first time, too.

Skelton was a former assistant to Paul Nicholls

Ambitious Skelton is hopeful of beating the likes of Nicky Henderson and the Tizzards again and will need his stable stars to fire.

Once more he has real depth in his novice chasers headlined by My Drogo, with Grade 1 winners Allmankind and Shan Blue also flying the flag.

We always hoped he’d be a Champion Chase horse, and we were gutted he got beat. It was too soft for him at Punchestown then.

He needs decent ground as he’s all speed. We’ll start in the Tingle Creek or the Desert Orchid, then it’ll be Cheltenham and the Celebration Chase at Sandown.

What a star he is. We were delighted with the Old Roan, it’s not often a plan like that comes together. The two and half is his trip now, but think he’ll get three miles eventually. We won’t over race him this season as he’s only five but I think Aintree in the spring will be his next big one.

We started low-key with him, he was 50-1 in a bumper and ended up winning a Grade 1. We didn’t want to do too much with him too soon and it worked. He’s jumped fences at home twice now, it went well. He’s got the size for and it and we’ll find a race for him over fences in November. There’s either one at Warwick or at the November Cheltenham meeting. It’s time to stop talking and let him do the walking.

He’ll start in the Charlie Hall next Saturday and that will tell us whether he’s a top handicapper or up to the next level. As a Grade 1 winner we’d hope it’s the latter. He’s great at Wetherby and I’ll have him super fit. It will tell us whether we can go for King Georges and races like that. He’s a great jumper and he’s hard, the more jumps in a race, the better.

We had a great start with him last year and thought wow, but he just didn’t fire after that for a while and chucked a moody in. But he came good at Aintree and we got a Grade 1 out of him. When everything is in his favour, he’s very good. But there will be days when it’s not and he won’t just beat by five lengths… He might start at Carlisle in their big Intermediate Chase but his big target is the Paddy Power Gold Cup at Cheltenham at the November meeting.

It didn’t quite happen at Cheltenham but there was lots to like at Uttoxeter. There’s not heaps to say with him as he just keeps surprising us, I don’t know how good he could be. We’ll regroup and find another spot.

He’ll be out at Christmas then will have a busy spring. Races like the Imperial Cup will be perfect. We couldn’t believe we bumped into a Grade 1 horse at Cheltenham in the Martin Pipe, it summed up the week.

He’ll stay hurdling this year and I think he’ll improve a lot. We’ll start at two and a half but move up to three and I think that will help him. The Stayers’ Hurdle division is always wide open and I hope he can be up to that.

He’s a natural chaser and he could be the real deal over fences as he showed at Cheltenham. Time will tell us if he’s a Grade 1 horse and I think he was unlucky last year. We’ll go back for the Grade 2 at the November Meeting.

I love this horse and we must have bumped into one at Aintree as we ran our race. Her form is rock solid and she’ll be a force this year in novice hurdles.

He’s really going under the radar for whatever reason, Harry loves this horse. There’s lots to be positive about going chasing. He’ll want two and a half for now and maybe move to three miles at the end of the year.