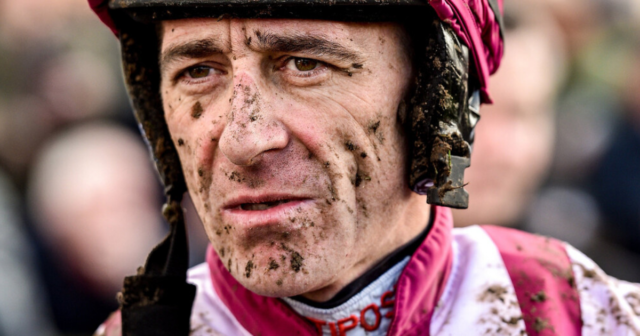 DAVY Russell is still no closer to confirming a comeback date.

The legendary Irish jockey has been out of action since a horror fall last winter left the rider needing bolts put into his head.

Davy Russell has 22 Cheltenham Festival winners to his name

His brutal recovery meant the 42-year-old had originally hoped to return to the saddle in March for the Cheltenham Festival.

But after receiving further medical advice, Russell was forced to rule himself out just a week before the four-day bonanza.

Russell has remained on the sidelines since and has said there’s no chance he’ll be back for the Galway Festival in two weeks.

He said: “I’m coming along good. I’ve no real date as such yet.

“It’ll happen in September hopefully at some stage, but that wouldn’t be definite.

“I’m getting plenty of physio twice a week and I’ve loads of exercises and things to do, so I’m getting stronger every day.

“Galway will be too soon, I’d say. Fingers crossed for September.”

Russell fell in the Munster National back in October at Limerick.

The rider who has partnered Tiger Roll to two Grand National wins at Aintree suffered a fractured and dislocated vertebrae.

As part of his recovery Russell had bolts drilled into his head and had weights hanging from his head to realign his spine.

Did you miss our previous article…
https://www.sportingexcitement.com/horse-racing/frankie-dettori-sends-message-to-england-fans-after-proud-moment-for-italian-football-after-euro-2020-penalty-win