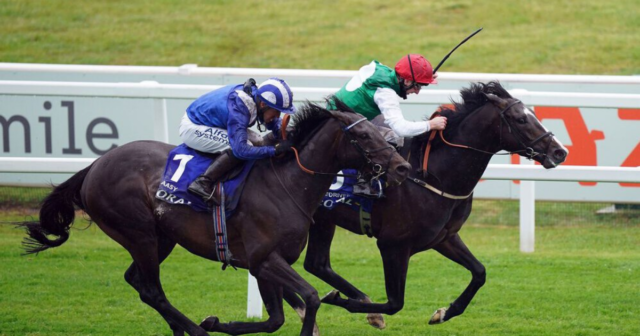 The top-class four-year-old picked up a suspected groin injury over the weekend and Lambourn-based Muir has decided not to risk running.

Pyledriver (right) was third favourite for the King George

The £875,000 King George is being billed as the ‘race of the season’, with brilliant filly Love set to take on Derby winner Adayar, as well as Irish Derby runner-up Lone Eagle and globe-trotting star Mishriff.

Pyledriver, who was a game winner of the Coronation Cup at Epsom last month, was the 5-1 third favourite in the betting behind Love and Adayar.

But he was scratched before Monday morning’s confirmation stage after tweaking a muscle in the build-up to the big race.

He was given a spin on the gallops by regular jockey Martin Dwyer – but just a few hours later he was showing signs of discomfort.

A despondent Muir said: “Saturday was unbelievable, we’d done exactly the same as we did for Epsom. He did a piece of work with Martin (Dwyer) who said it was magnificent.

“The way he came through was fantastic and I walked away from the gallops thinking it will take a good horse to stop us.

“I met him coming back along the road and he was bouncing, bobbing and kicking, and I thought this horse could have not been in better shape.

“I got a phone call from the evening stables when I was at Newbury on Saturday from my vet saying he thought he may have tweaked his right groin.

“I told the owners you can’t have any setback, you cannot run in that type of race.

“I’ve seen things all my life in racing when you try to do something and it all goes wrong, I couldn’t live with myself if that happened.

“If I ran him and something terrible happened I would close my gates and stop training, I wouldn’t be able to carry on. I can’t take a chance with any horse.”

Muir continued: “The vet will come today and give him the full once over and then we’ll go from there.

“If it’s something very simple and he’s fine in three days then he’ll go for the Juddmonte, which he definitely has the speed for.

“If it’s something we have to give him four or five weeks off for and have a break, we’ve got so many options to campaign him towards still.

“I thought he’d win on Saturday, I really did, but we’re not going to be part of it anymore, it’s tough. I’m gutted to be honest.”

Ascot are expecting a crowd in the region of 14,000-16,000 on Saturday, the biggest crowd at a race meeting since before the pandemic.

Advertisement. Scroll to continue reading.
In this article:Ascot, Epsom, Newbury