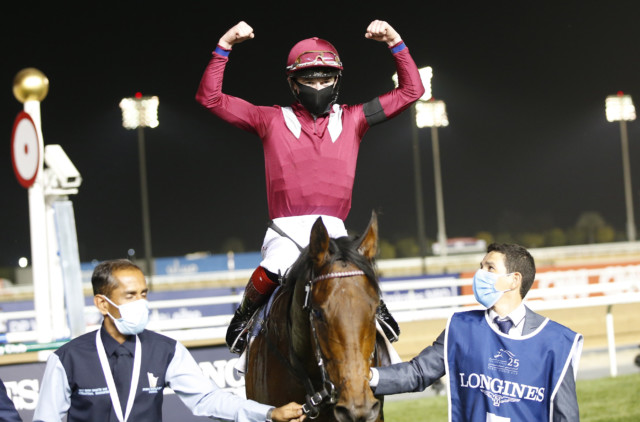 DIDDY David Egan is buzzing ahead of Saturday’s Coral Eclipse at Sandown.

The fresh faced 22-year-old is set to partner the John and Thady Gosden-trained Mishriff in the weekend’s big Group 1.

And with only six potential rivals left in at Monday’s entry stage, Egan is licking his lips ahead of another potential huge payday.

The bookies rate Mishriff the 13-8 favourite, with Aidan O’Brien’s St Mark’s Basilica the big threat after his French Guineas and Derby double.

Egan said: “Mishriff means a hell of a lot to me, he’s helped put me on the map and I can’t wait for Saturday.

“We’ve won a lot of races abroad so now it would be great to win a big one on home soil.

“The stiff ten furlongs at Sandown up the hill should be perfect for him, it’s his optimum trip. He has plenty of pace.

“I know a few have come out but it’s still a hot race and we’ll take nothing for granted.”

Egan has already ridden the horse home in the £2.2 million Dubai Sheema Classic but after stablemate Lord North was ruled out, it left Frankie Dettori without a ride.

However, owner Prince Faisal will stick with Egan this year after previously opting to use Dettori.

Faisal’s racing manager Ted Voute said: “David is our retained rider and Frankie hasn’t been on the phone this time!

“David did a wonderful job in Dubai and he’s our man now. He came good when it mattered and earned enough that day alone!

“It would be great if we can do it on home turf now, this has been the plan for a good while.”

Fellow O’Brien runners Armory and Japan have also been left in contention, with Addeybb and Wonderful Tonight also in the mix.