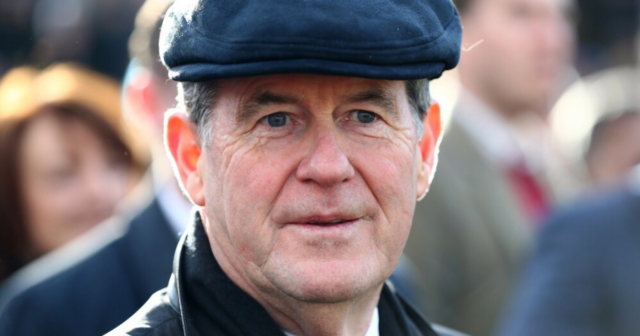 THERE was the mother of all mix-ups at Kilbeggan races in Ireland on Friday night.

In fact – the confusion has been TWO MONTHS in the making.

The two mixed-up horses are owned by JP McManus

That is because the 12-year-old Plinth, who has had 84 runs during his career, turned up to race in a maiden hurdle, with his trainer Shane Broderick believing he was a four-year-old called Grove Island.

Both horses are owned by JP McManus, and the amazing cock-up is believed to have started in March at his Martinstown Stud.

Grove Island, who raced unsuccessfully on the Flat for Joseph O’Brien, was set to be sent to Broderick to start his hurdling career.

He stopped off at Martinstown Stud, where McManus’ horses go to retire or for mid-season breaks, before the stable switch.

But when it came to sending the horse on to Broderick, the Grade 2-winning hurdler Plinth was sent by mistake.

And the trainer and his team apparently had no idea that they had received a 12-year-old veteran instead of a four-year-old who had never jumped a hurdle in his life.

Officials scanned ‘Grove Island’s’ microchip before his race at Kilbeggan – but it turned out to be Plinth and the horse was immediately scratched from the race.

There will have been a few red faces in the Broderick and McManus camps after the ridiculous mix-up.

Luckily no damage was done, and racing fans were able to see the funny side on social media.

One said: “They must have been impressed with the four-year-old’s schooling on his first try over hurdles!”

Another joked: “Jesus, what have they been drinking down there?”

While another added: “Personally I’d be bloody embarrassed if I couldn’t spot a 12-year-old was in fact a 4-year-old. Staff must go around with their eyes shut!”

There was a serious case of mistaken identity at Galway last year, when a Jessie Harrington-trained three-year-old won a two-year-old maiden.

Harrington was fined £1,500 and the ‘winner’, Alizirane, was disqualified.

In this article:fridaynight, hasbeen, infact