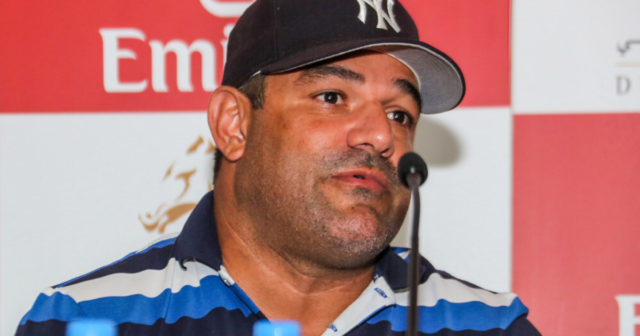 A DISGRACED racehorse trainer known as ‘juice man’ will repay £18.9MILLION in winnings and faces five years in jail after admitting his role in a massive doping scandal.

Jorge Navarro, 46, pleaded guilty to doping horses with illegal drugs – hidden by codenames such as ‘monkey’ and ‘red acid’.

Navarro’s biggest-earning horse, X Y Jet, died of a heart attack as a result of the rampant doping.

The shamed trainer admitted to juicing his runners for years in a bid to dupe punters and land some of racing’s biggest prizes.

Navarro was branded a ‘reckless fraudster’ as he admitted in a statement: “I was the organiser for a criminal activity that involved five or more participants.

“I co-ordinated the administration of non-FDA approved drugs that were misbranded or adulterated to horses under my care.

“I abused a position of trust as I was a licenced horse trainer and the horses were in my custody at the time.”

US attorney Audrey Strauss said: “As he admitted, Navarro, a licenced trainer and the purported ‘winner’ of major races across the world, was in fact a reckless fraudster whose veneer of success relied on the systematic abuse of the animals under his control.”

Navarro’s lawyer Jason Kreiss confirmed the trainer had accepted responsibility for his actions.

Earlier this month, veterinarian Kristain Rhein pleaded guilty to his role in supplying illegal and mislabelled substances to Navarro and 14 others who also face charges, prosecutors said.

At least 31 trainers, veterinarians, drug distributors and others have been charged since March 2020 over alleged doping affecting races in New York, Kentucky, Florida, New Jersey, Ohio and the United Arab Emirates.

Another accused of doping is Jason Servis, the world-beating trainer of Maximum Security, who won the £14.9m Saudi Cup – the world’s richest race.

Maximum Security was also first past the post in the 2019 Kentucky Derby before being disqualified for interference.

They allege he doped the horse in March 2019 before he won £1.1m in the Dubai Golden Sheen.

The horse died of a heart attack in January 2020 and court papers claimed Navarro had been implicated in the deaths of other horses through global doping scheme.

Navarro was seen celebrating when X Y Jet won the biggest race of his career but the disgraced trainer admitted doping the horse before he died of a heart attack
In this article:York