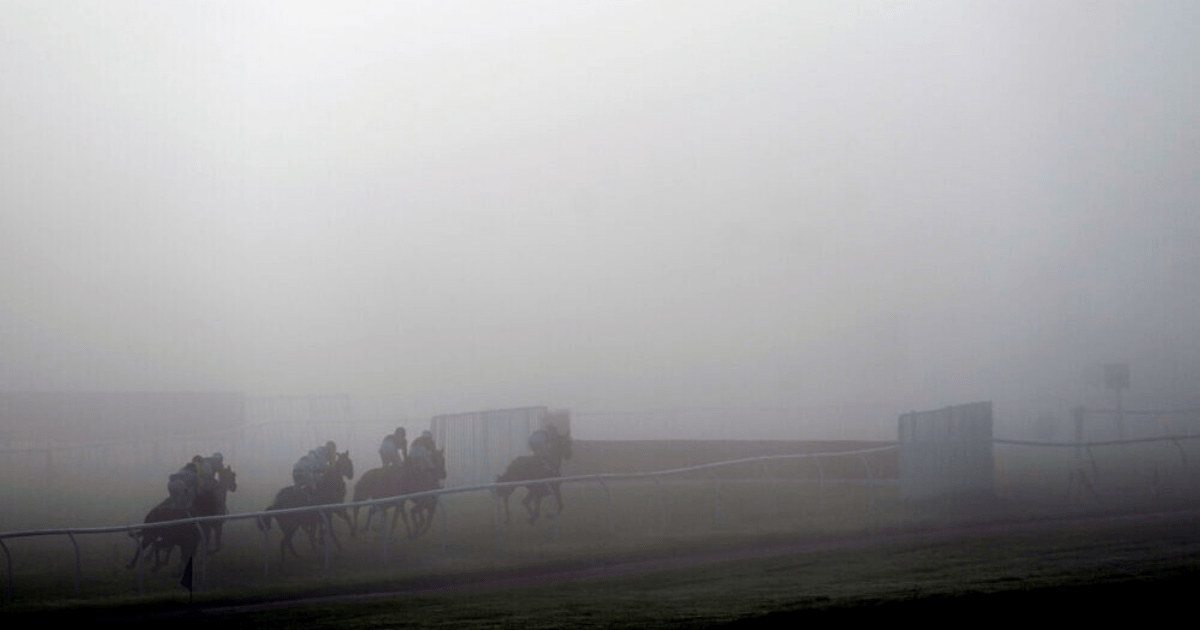 FURIOUS punters slammed the ‘disgraceful’ racing conditions at Wincanton – as thick fog meant no one could see a thing.

Conditions meant that the helicopter of top amateur jockey Patrick Mullins was not able to land and he was diverted to Birmingham Airport.

Mullins was set to make a rare appearance at the Somerset venue aboard Filey Bay in the Weatherbys Stallion Book Handicap Hurdle for Grand National-winning trainer Emmet Mullins.

But he was forced to give up the ride, with Richie McLernon landing a winner on the 8-13 favourite in his place.

A fog weather warning had been issued by the Met Office, but officials gave the all clear for racing to go ahead.

Cameras had a tough task of following the runners and riders around the gloom of Wincanton.

Race day commentator Richard Hoiles also had the difficult job of keeping punters updated but had to leave significant gaps during his commentary due to the poor visibility.

In-running punting on the exchanges also looked nigh-on impossible in the pea soup.

Wincanton said they would monitor conditions throughout the day but the full seven-race card remarkably went ahead.

However, not all were happy and some racing fans took to social media to express their views.

One fan wrote: “Lets hold up Market Rasen and Leicester races too so everyone can watch the Wincanton races that nobody can see!”

While another commented: “It’s going to be a long drive back to Newcastle.”

One post read: “Disgraceful this from Wincanton today, spectator sport.”

And another wrote: “This is ridiculous at Wincanton. Low sun an issue but riding in pea soup absolutely fine it seems!”

Elsewhere, on the card Harry Kimber didn’t mind the weather as he rode a double with victories on Shutupshirley and Born At Midnight.

In this article:mean, means, punters