Doctors drilled into my head, it was torture – Jockey Davy Russell lucky to walk again after unbearable rehab
Advertisement 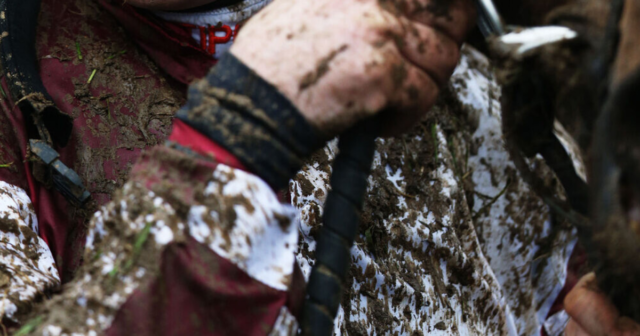 GRAND NATIONAL hero Davy Russell has gone into detail about the excruciating rehab sessions he endured fixing a broken neck.

And he has revealed how he was happy he didn’t ‘wimp out’ – despite having bolts drilled into his head.

Russell, 42, was given just a ten per cent chance of ever walking again after a horror fall in the Munster National in October 2020.

Doctors put him into traction to straighten him up as part of the ‘torturous’ recovery procedure.

It took Russell, a two-time winner of the world’s most famous race on Tiger Roll, 11 months to get fighting fit again.

Now he is planning an all-out assault on the Cheltenham Festival with a host of Gordon Elliott-trained superstars, including Tiger Roll.

But the story could have been very different had treatment not worked.

Russell knows he is fortunate not to have ended up in a wheelchair.

Now he is planning staying at the top of the sport that bit longer, with Tom Brady giving him the inspiration to keep going against rivals half his age.

Russell told Sky Sports: “The surgeon said I was in the ten per cent of people who had that injury who walk again.

“It was a simple fall, I just landed awkwardly and fell on the top of my head and compressed down.

‘A FIREWORK IN MY THUMB’

“I broke one, crushed another and dislocated another so I knew I was in a bother when it felt like a firework went off in my thumb.

“There wasn’t a huge amount of pain, just discomfort and I actually thought it was my shoulder that was broken.

“All the medical staff were fantastic – I had to go into traction to stretch me out to put the dislocation back in.

“When they were operating they had to go through the front and they didn’t want anything in the way.

“They bolt into the side of your head and add water and weights till it opens up enough to allow it back in and that was pretty torturous.”

It was a few days before the October meeting at Cheltenham 2020 that Russell had the fall.

Some 18 months on he will go back to Prestbury Park with a strong book of rides, including the likes of Gold Cup hope Galvin and Pied Piper, who destroyed rivals in a Triumph Hurdle trial last month.

FROM DISASTER TO CHELTENHAM SUCCESS

Explaining how his injury affected his sight, he said: “I had an awful problem of lifting my neck up to see the full landscape and it was only a few days before Cheltenham.

“I couldn’t see everything I needed to see – I could only see the horse’s tail in front of me and not the broader picture.

“I didn’t renew my licence till a few days before I came back. We schooled a few horses one day and it just clicked – it was time to come back riding.

“The beauty is now I can retire in the morning happy – it was great to come back and win the Irish Gold Cup but I’m not afraid. My bottle is intact and I have nice horses to ride.

“I’m just happy enough to have pushed myself and I didn’t wimp out when I could’ve.”