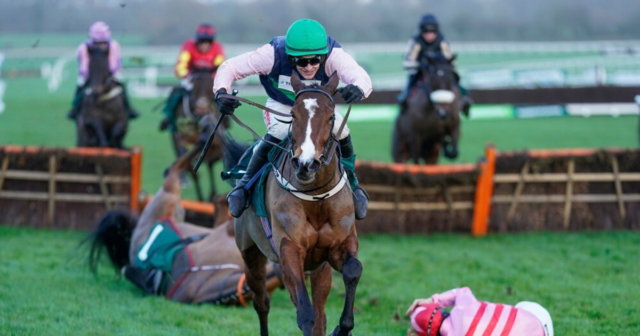 POCKET rocket Stormy Ireland provided the New Year fireworks at Cheltenham as she came out on top in a dramatic Relkeel Hurdle.

But Willie Mullins’ mare had the last flight to thank as favourite Brewin’upastorm came down in a heap when coming with his challenge.

The two and a half length win capped a memorable festive period for rider Danny Mullins who was still on a high from his King George heroics.

At Kempton he’d moved Tornado Flyer from last to first but here at Cheltenham, he had Stormy Ireland in front from the flag drop to the winning post.

Once Aidan Coleman and Brewin’upastorm crashed out, the 4-1 shot was left in front with only Paul Nicholls’ McFabulous running on with any intent.

Stormy Ireland failed to win in four starts for Nicholls last season and the champion trainer could only look on as the Mullins magic worked a treat again.

The winning rider was quick to praise his uncle for the turnaround in her form for her new owners.

He said: “It was 50-50 coming to the last but my gut says I was starting to get on top anyway. She is a right tough little mare. She’s not the biggest but she has a huge heart.

“I was only on her because Paul Townend was on Al Boum Photo at Tramore, but you don’t mind that when you’re part of a team like this.

“The plan was always to go out and make the running and they couldn’t get to her today.”

Owners Future Bloodstock forked out £75,000 for Stormy Ireland after her four defeats for Nicholls.

They wanted to take her off to the breeding sheds, but have now won two Grade 2s and a Grade 1 and have their eyes set firmly on the Mares’ Hurdle at the Festival in March, for which she’s 7-1.

An emotional David Greenway said: “I lost my brother Tom a couple of months ago. He was a point-to-point jockey and fell, I think he was helping us out there today. It’s still fresh, and that’s why I was teary as she came back in.

“I’ll get in trouble for saying this, but I think she has a great chance in the Mares’ Hurdle. There aren’t many stars in the division.

“Paul did all the hard work with her to be honest – strengthening her up, up his gallops. We thought she’d be a broodmare but we’re still living the dream. Willie knows her best!”

Olly Murphy was still proud of his Brewin’upastorm despite his last flight blunder. He said: “We’re not getting any prize money but he looked as good as ever there. The horse and jockey are both fine and that’s the main thing.”

Over in Ireland, two-time Gold Cup winner Al Boum Photo got his season off to a winning start.

He beat three Mullins’ stablemates at odds of 1-6 in Tramore’s New Year’s Day Chase, his fourth win in the race in a row.

But after a brief scare turning in and a few mistakes on his way around, the bookies were unimpressed and both Paddy Power and Betfair left his Gold Cup odds unchanged at 14-1.