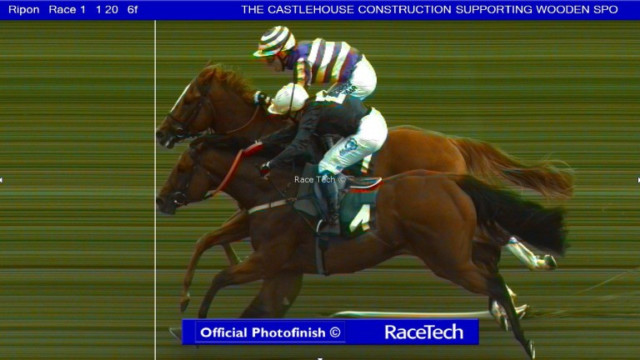 THERE was Bank Holiday drama at Ripon as the judges couldn’t split the front pair of the opening novice.

After a lengthy look at the photo finish, the judges announced a dead heat between Maybe Even Never and Sunday Justice.

Near side or far side?

For much of the straight it was Sunday Justice who was in control on the front-end.

But as the line neared Maybe Even Never and jockey Phil Dennis found one last push roared on by the capacity crowd.

It was enough to force a photo and in the end a joint-win for David Barron’s team.

It kept up the red-hot form of the Nigel Tinkler yard, too – fresh off a 65,000-1 four-timer across Saturday’s action.

Speaking afterwards Tinkler said: “I thought we’d definitely won until the last stride. The other had his head down and we had our head up, so I could tell it was very close.

“It was no surprise when the dead-heat was called and it was a good performance from both horses.

“He missed the break a bit and got there a bit sooner than the jockey would have liked, but he’s a nice horse and has done that well under a penalty.

“We’re just concentrating on what’s next. The last few days have been good but we’re flat out every day at the moment.”

The main dish of the day was won by a resurgent Flotus who set up a potential big-race target before the season is out with a comprehensive victory in the Two-Year-Old Trophy.

Simon and Ed Crisford’s youngster won handsomely under Silvestre De Sousa by close to five lengths and was trimmed into 8-1 for the Group 1 Cheveley Park at Newmarket.