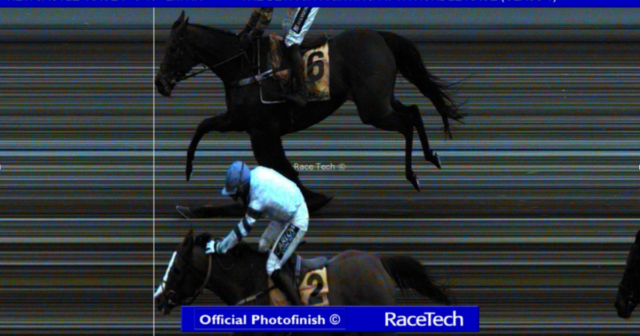 THIS dramamtic dead-heat photo finish had punters in uproar – due to a dodgy camera angle at the finish post.

Epatante and Not So Sleepy shared the spoils in a thrilling renewal of the Betfair Fighting Fifth Hurdle at Newcastle last Saturday.

A number of punters thought Epatante, at the top of the photo finish, had got in front, but they appeared to have been fooled by a dodgy camera angle shown on TV

The shares are spoiled between Epatante and Not So Sleepy at @NewcastleRaces! pic.twitter.com/vFSInXKX23

The Hughie Morrison-trained Not So Sleepy – a big 18-1 shot before the off – rallied late to peg back Nicky Henderson’s 11-8 favourite.

The official result went to the judge, who decided it was too close to call and that the horses had finished at the exact same time.

But some punters hit the roof as soon as the verdict was delivered.

They thought 2020 Champion Hurdle superstar Epatante had got in front right at the death.

In response to a clip of the finish, one Twitter user wrote: “Epatante clearly won that.”

Another posted: “Epatante has clearly won the race. What on Earth is going on here?”

One viewer wrote: “Epatante looks the winner from every angle.”

While a fellow punter posted: “Thought Epatante won on that angle.”

But the devil is in the detail and some punters were indeed right to pick up on the camera angle.

That’s because the camera angle used to show the action at Newcastle was not perfectly aligned with the finish post.

The judge of course had the perfect spot to see the finish – and the benefit of the mirror showing the horses from the blindside too.

As it was, this was the first dead-heat called in the 52-year history of the race.

Epatante’s jockey Aidan Coleman admitted he was disappointed not to win on the favourite and was in the end thankful just to get a share of the spoils.

FIRST EVER DEAD-HEAT IN THIS RACE

The frustrated rider told the Racing Post: “I was very sceptical, I was being a bit negative as I was there a bit soon but all credit to the two of them.

“It was a great race. It’s hard when you’re in the race but it’s one of those when you’ll look back at the battle they had from the back of the last and you’ll say it was the fairest result.

“You always want to win, especially Grade 1s, you don’t want to be sharing them but at the same time it’s a good result.”

Not So Sleepy’s jockey Jonathan Burke said he had no idea who had won passing the post and was happy with honours shared.

He said: “I really didn’t know, I was hoping more than anything – we’ll take the dead-heat.

“As the day progressed the ground worsened and that helped my horse’s chances. We went back to riding him aggressively and he likes being in the thick of it.

“When the others came either side of him he really stuck his head out for me.”

Did you miss our previous article…
https://www.sportingexcitement.com/horse-racing/watch-hilariously-awkward-moment-man-rejects-marriage-proposal-at-the-races-before-videos-brilliant-ending

Advertisement. Scroll to continue reading.
In this article:Newcastle