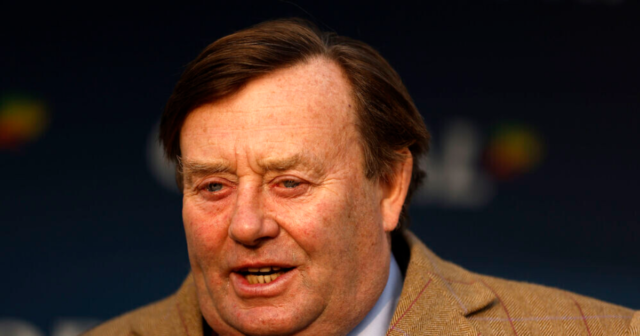 NICKY HENDERSON looks to have a Cheltenham Festival dark horse on his hands in the shape of Dusart.

The exciting seven-year-old made it 2-2 over fences with a convincing victory over three miles at Exeter.

He is the younger brother of Henderson’s former champion Simonsig – who owner Ronnie Bartlett used to nickname Maradona.

After Dusart made his winning debut in November 2020, Henderson said: “We’ve looked at buying lots of Simonsig’s relations over the years.

He might be a different shade to that brilliant grey, but it appears at least some of the talent has been passed down.

Dusart was an impressive winner on his hurdles debut and on just his second start he was third in the Grade 1 Top Novices’ Hurdle at Aintree last April, having been forced to miss Cheltenham after a minor setback.

His win on chasing debut was workmanlike, as he ploughed through the mud at Leicester to win a race which became something of a farce after several obstacles were bypassed because of low sun.

But this was much more like it as, bar shifting left at some of his fences, he jumped soundly and gave weight and a beating to the useful 138-rated Flash Collonges.

The bookies trimmed his odds for both the Brown Advisory Novices Chase and the Turners Novices’ Chase, over three miles and 2m4f respectively at the Festival.

The Brown Advisory looks the likeliest option at present, with his target likely to depend on ground conditions, and Paddy Power cut him into 20-1 (from 33-1) for the Grade 1 on day two of the Festival.

Jockey Nico De Boinville said: “I think he will prefer going left-handed, I could get away with shifting left today at this galloping track.

“They’ve done a great job with him since Leicester – we only jumped eight fences that day and I’m not sure it did his confidence any good as he wasn’t expecting them every time we reached a fence.

“He learnt plenty today and I’m confident he will come on for that.

“He is still learning his trade, it is easy to forget that was just his fourth run so he is entitled to be a bit green and novicey.

“We will see what the guv’nor and Ronnie want to do. He is very straightforward and he has all the right credentials. We just need to get some more experience into him.”