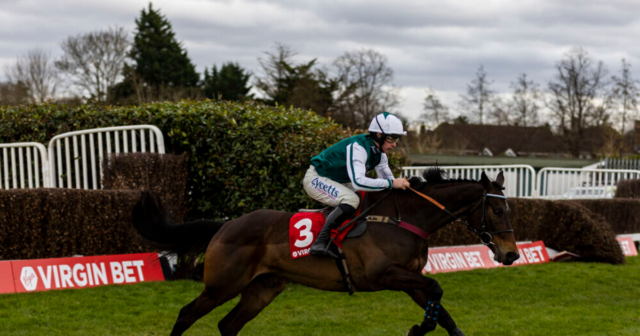 L’HOMME PRESSE made it four from four over fences with a dominant win in the Grade 1 Scilly Isles at Sandown.

Jockey Charlie Deutsch punched the air as he crossed the line to mark his first success at the top level.

Venetia Williams’ seven-year-old was barely off the bridle throughout with a loose horse causing him more trouble than any of his four rivals.

He was cut into 11-2 from 8-1 for the Turner Novices’ Chase at Cheltenham but does have the option of the three mile Festival Chase.

Deutsch said: “That’s my first Grade 1 and probably the easiest one I’ll ever win. He has loads of class.

“He’s a brilliant jumper and my main worry was not being carried out by the loose horse!”

Talented Goshen bounced back to form in the Listed Contenders’ Hurdle under Jamie Moore.

The frustrating six-year-old made the most of a return to a right-handed track as part of a double for trainer Gary Moore.

The handler hoped the 15 length win would ‘shut up’ his critics.

He said: “It makes a big difference to him going right-handed and in soft ground. It suited him. 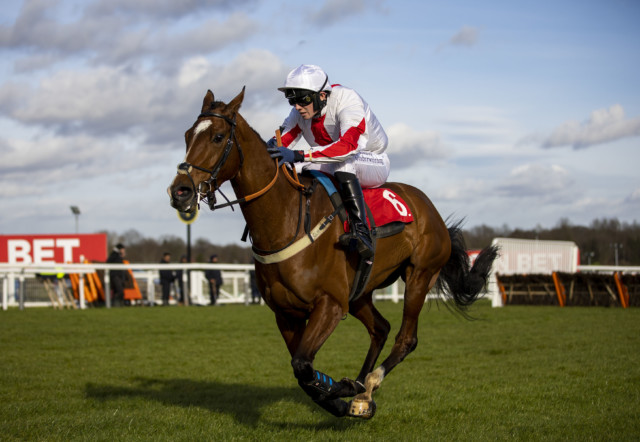 Goshen bounced back to form for his owner Steve Packham

“It shut a lot of people up. They keep knocking him all the time, asking if the real Goshen will turn up – he turns up every time.

“But he had everything in his favour today and he showed how good he is.

“The pace was perfect, with the other horse going on, so he didn’t have to do his own donkey work.

“But Jamie said he was flat out anyway. I think they have gone a reasonable gallop.