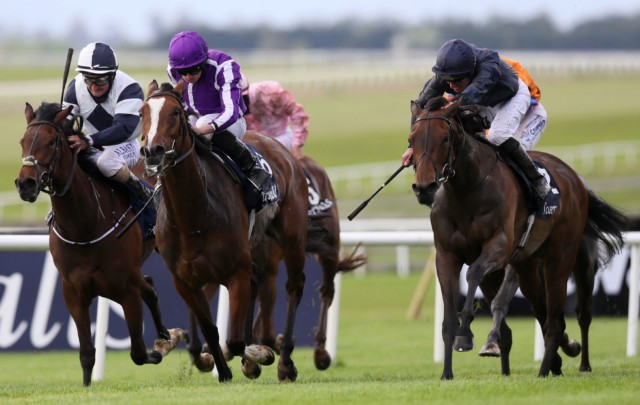 EMPRESS Josephine ruled over her Irish 1,000 Guineas rivals with a last-gasp win at the Curragh.

The 14-1 shot engaged overdrive in the final furlong to catch her stablemate Joan Of Arc in the final stride.

Empress Josephine (right) sprung a 14-1 surprise in the Irish 1,000 Guineas

It gave Aidan O’Brien an unprecedented TENTH win in the Classic – and it’s the fourth time he’s saddled the first and second.

Joan Of Arc (9-2) was the Ballydoyle first-string, and she looked poised for victory when looming alongside the front-running No Speak Alexander (13-2).

But that filly refused to go down without a fight, and as they traded blows Empress Josephine came over the top to land the spoils under Seamie Heffernan.

O’Brien said: “She won very nicely the first day and we always thought she was a lovely filly.

“She had a nice run at Gowran last time but the nine furlongs there probably caught her out.

“Seamus gave her a lovely ride and she is a very classy filly.

He added: “We wanted to step Joan Of Arc up in trip after today and that is still the plan.

Earlier on the card, former champion jumps trainer Noel Meade bagged his first ever Group 1 winner on the Flat.

His 8-1 shot Helvic Dream came out on top in a head-bobbing finish with the odds-on favourite Broome in the Tattersalls Gold Cup.

Meade said: “I was roaring him home! He’s a very classy horse.

“I was afraid to dream we could win – but I can die a happy man now!”