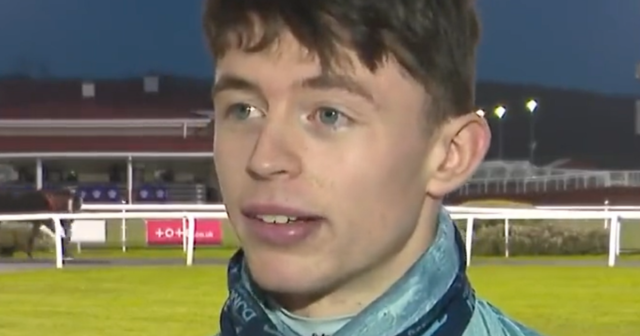 A PROMISING young footballer bullied for being ‘tiny’ is now winning thousands as a top young jockey instead.

Christian Howarth, 19, was on the books at Cambridge United, but now he’s netting winners of a different kind after a rapid rise up the jockey ranks.

Howarth, whose old side knocked Newcastle out of the FA Cup in an epic giant-killing, only started race riding in July 2020. In all of that year and 2021, he managed six winners from 94 rides.

But 2022 has started with a bang with two recent quickfire victories in Flat races at Lingfield and Chelmsford.

Incredibly, Howarth – who is the son of Saeed bin Suroor’s assistant for the last 20 years, Tony Howarth – did not start riding until he was 16.

The teenager, who shares a similar back story to fellow jockey and former Crystal Palace kid Fred Larson, said: “I was football-mad.

“I was always tiny, and I used to get bullied about it a bit, but I was quick and I was skilful and was one of the top goalscorers in Suffolk.

“When I was about ten I was playing for Newmarket against Burwell, our big rivals, and I scored 13 and we won 21-0.”

“But at 15 though I got released by Cambridge, who I’d been with since I was about ten.

“Every year you’d get a phone call, but this time it was to say they weren’t keeping me on. I was gutted.”

Despite going to Meydan in the UEA – where his dad spends six months a year – annually from the age of four, Howarth failed to show any interest in racing until after that distressing call.

After toying with being a bricklayer – he did two weeks’ work experience – he started to show a growing interest in the equine world, which flourishes in his home town of Newmarket.

“At 16 I was about seven stone and I started going to see my mum Bronny’s pony and eventually I sat on it but I was useless.

“Then I said I wouldn’t mind going to racing school. My mum wasn’t really for it but my dad was.

“At first I hated it and I’d come home every weekend literally crying. Everyone was ahead of me. I was there for 14 weeks but I’d always have to stay behind to do extra riding.

“I was so down, but my dad forced me to stay and it was the best thing he could have done.

“After I came out of racing school I was still hopeless, but then it started clicking.

Two winners from three rides in 2022!

“I take everything really to heart and if I get beat on one that was expected to win, I’ll struggle to sleep.

“It’s like when I was playing football, if I missed an easy chance it would stay with me for days.”

Despite his growing reputation, Howarth – who claims 7lbs as an apprentice – still remains ultra-tough on himself, even though the likes of family friend Frankie Dettori have been messaging him with support and praise.

He said: “I always watch my rides with my jockey coach Neil Pollard and I’m still too hard on myself.

“My girlfriend (fellow apprentice) Morgan Cole is great though, she’s always understanding and is there to support me.”

As for his ambitions, Howarth said: “I’d like to double my winners this season to 12. My full season I rode six, this one I’ve ridden two in the first six days.

“I’m just so motivated. I was meant to go to Dubai next week – my dad’s out there – with Morgan. But now I’d prefer to stay here now I’ve got the momentum… once you stop, will I get it back again?

“I rode my fourth winner maybe six months ago and between that and my fifth was maybe 70 days. Now I’ve had two in three days. I love that feeling, I’d choose riding a winner over anything.”