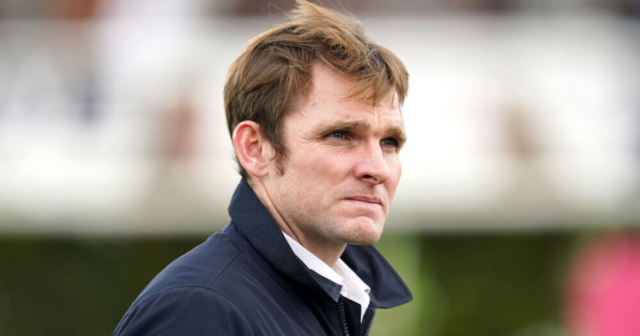 But on Sunday the pint-sized footballer turned stable lad is saddling-up for his first ever race ON a horse.

However, he’s had to spend this week out of the Somerset pubs after work to make the 12 stone weight for Sunday’s charity race at Wincanton.

The Racing Welfare fundraiser marks the pinnacle of the 37-year-old’s second job in sport – having achieved promotion to the Premier League with Brian McDermott’s Royals in 2012.

After switching to the sport of kings and landing a job at Phillip Hobbs’ Sandhill Racing Stables, Tabb said: “As soon as I’ve done this race, that’s it!

“Jockeys are so tough. In football, if we had the tiniest little strain we wouldn’t play. I’ve seen jockeys after falls, limping into work and getting back on the horses. They are tough boys and girls.

“I might be the height of a jockey – but I’m not the size of one. I was probably 12-and-half-stone playing football and I have had to lose a few pounds this week.

“If it goes okay, I might do a point-to-point in a few years, but that’s as far as it goes. I’m really happy working in racing and having this job as a stable lad.

“But I’m definitely not a wannabe jockey – I’m too old, too heavy and definitely not good enough! It has never been about being a jockey, though, it’s about getting the experience.

“So this charity race is a great thing for me to tick off to say I have ridden a race horse, in a race. I get to ride the horses up the gallops every day, but it is nice to have that experience on a race track and ride on a racecourse. I feel very lucky.

“So I’m excited – but the nerves will be more over the fact I’ll be sitting on a half tonne animal. I just hope we all get to the start okay, jump off and then it’ll be over in the blink of an eye.

“And I don’t think I’ll be nervous like I would be before a big Premier League or Championship match.

“Because when I was a footballer you were expected to win and you didn’t want to let people down.”

Tabb left London for Doncaster in 2019 where he completed a three-month crash-course at the National Horseracing College.

He then found a job with Cheltenham and Aintree-winning trainer Hobbs in the West Country – and has never looked back having developed a love of horses in his footballing days alongside ex Cov City defender Ben Turner.

“It’s been two years and counting in Somerset and it’s been an amazing experience,” he told SunSport.

“I’ve been in every morning at 6am, mucking out, then riding four or five times a day. Quick break for lunch then back at 3pm until 5pm. It’s a full-on, hard-working day.

“But I’ve got to go racing too and led up at Cheltenham and Newbury, so I have loved every minute of it. Riding the horses is the high point of the job and I’ve been so lucky to sit on these great horses that Mr. Hobbs has.

“You get on those good horses and wow, they do it all so easily and that is a great feeling. We had a lot of good horses for J. P. McManus, too, so that was a great experience.

“You have to pinch yourself sometimes, having been racing lots and watching it all the time. To then sit on those horses you see on TV, it is really special.”

Just like in his football days, Tabb has had to make sacrifices to get his dream ride this weekend.

He admitted: “There have been a few days when I wish I could have gone to the pub and had a pint!

“I love it when we have a hard day at work and go to the pub at the end of the day for a few pints and a chat. I have met some amazing people and a lot of friends who will be friends for life.”

As well as the day job Tabb also looks after his old racehorse, Mister Miyagi, who he bought with Turner during their playing days.

And even though he has been around the sport for almost a decade now in one way or another, becoming the next Willie Mullins or Paul Nicholls isn’t for him either.

He said: “If you’re a trainer, the hours you work are non-stop.

“You’re like a football manager. I don’t really want to do that, I am happy being a stable lad.

“You need to know a lot, too. I have come into the industry very late and it’s hard to know everything in your mid-30s. There is horse racing all over the world and when you start off you realise people always know someone somewhere.

“So, in time, when travel is easier, I wouldn’t mind seeing the world and riding out in different countries.”

First, Tabb will soon move back towards Ascot and also has plans to play more rugby, having turned to egg-chasing after his football days as a goal-kicking scrum-half.

The sports-mad star added: “I am missing rugby and my brother is still playing for our old team – I will try and start playing again.

“I go watch the boys at Old Wimbledonians after riding out on a Saturday morning and I just want to play as I’m rubbish at watching.”