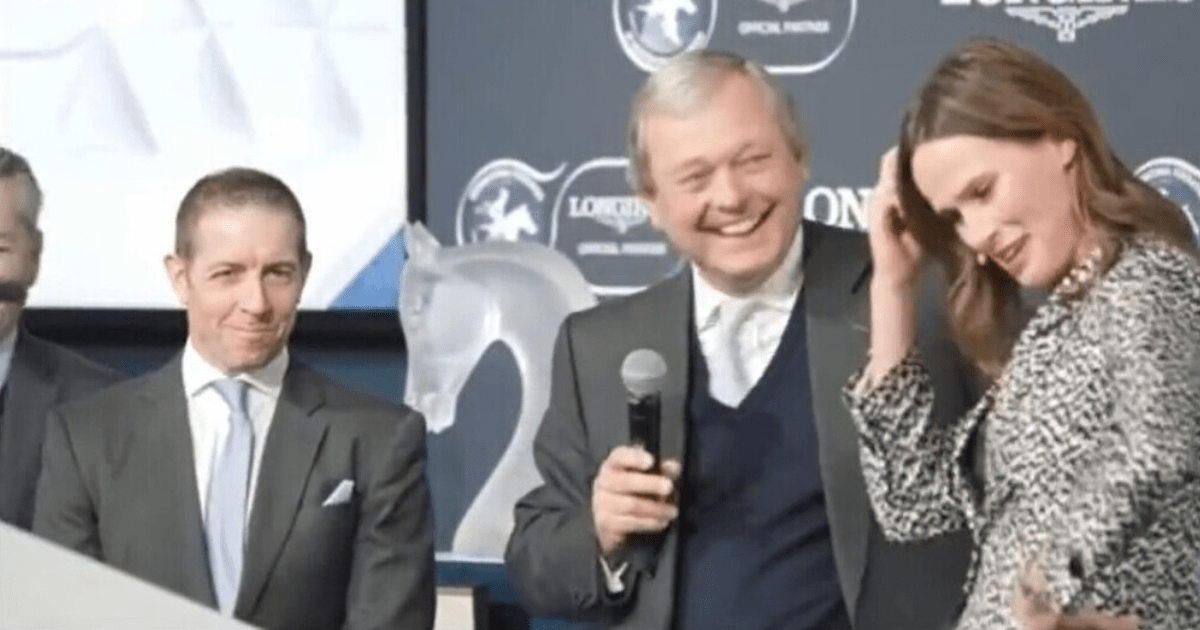 Haggas, 62, jokingly referred to the glamorous ITV Racing presenter being in her pyjamas as a way of putting off a horse.

Speaking at the Longines World Racing Awards, Haggas was on stage next to Cumani, 39, when they were discussing the achievements of Baaeed.

Cumani was waxing lyrical about Haggas’ former horse, only for him to change subject to American superstar Flightline, who was recently rated the highest ever alongside Frankel.

Haggas, seemingly referencing Cumani’s stint presenting racing Down Under, said: “It’s a shame Flightline didn’t see you in your pyjamas in Australia. It might have made him lose concentration.”

To which a laughing Cumani replies: “OK, I wasn’t expecting that one. Right, where do we go from here?”

A somewhat bemused Jim Crowley, who rode Baaeed in all of his races, can be seen looking on.

The clip was picked up by popular Twitter profile Racing Creeps – and sparked a load of comments from wincing punters.

One of them was from Lippy Hopwood, the jockey-turned-Onlyfans star who wrote: “Francesca’s Onlyfans coming soon featuring PJs.”

One comment said Haggas’ joke was ‘gross’ while another claimed it was ‘wildly inappropriate’.

Another Twitter user wrote: “This level of cringe is off the charts.”

While one post read: “This should come with a warning, I wasn’t ready for the cringe.”

Another wrote: “This makes me so angry.”

Cumani was at the centre of another awkward exchange during last year’s Cheltenham Festival.

She was forced to apologise for a winning owner’s X-rated interview during the live ITV broadcast.

Did you miss our previous article…
https://www.sportingexcitement.com/horse-racing/constitution-hill-injury-rumours-shot-down-by-furious-nicky-henderson-who-says-there-are-people-trying-to-get-me/