‘Female’ horse that was sold for £120,000 for breeding turns out to be male
Advertisement 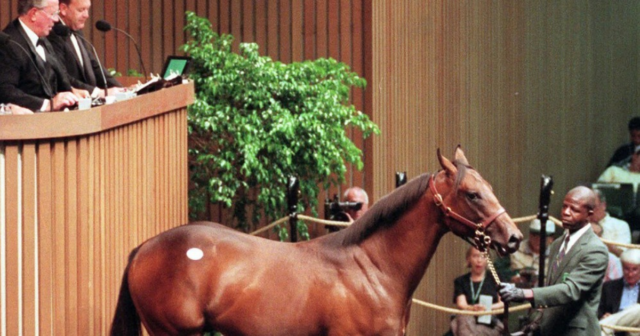 THE new owners of a £120,000 ‘female’ racehorse received the shock of their lives when sending her to the vets for a check-up.

The six-year-old had retired and was all set to begin her breeding career – but it turns out ‘she’ is a ‘he’.

Kept True, who has the outward appearance of a mare, raced exclusively against female horses, winning five races and bagging nearly £275,000 in prize-money.

She was a valuable broodmare prospect at the end of her racing career and attracted plenty of attention in the sales ring at Keeneland in America last year.

Stud farm owners Michelle and Alex Crawford fought off intense competition to make the winning bid and sent the horse to be checked over to make sure she was able to get pregnant.

But to their surprise – and to the surprise of the dumbfounded vet – they discovered she had no ovaries.

Further tests revealed she has a rare genetic condition that gives her the appearance of a female horse, when in fact she has male XY chromosomes.

The vet who carried out the tests said: “There are obvious abnormalities in the horse’s reproductive organs.

“Kept True has the appearance of a female horse, but the chromosomes of a male.”

The Crawford’s asked for the sale to be cancelled and their money back – but her previous owners refused. A lawsuit is now ongoing.

Racing fans saw the funny side on social media.

Another said: “This is absolutely wild. Never heard of anything like this before.

While another added: “I always thought she was very handsome for a filly.”

But connections of the horses she beat during her racing career were not so amused.

She cannot be disqualified from the races she ran in as the rules in America state an objection has to be lodged within 48 hours – meaning connections of the horses she beat will still be out of pocket.

Did you miss our previous article…
https://www.sportingexcitement.com/horse-racing/champion-trainer-charlie-appleby-to-decide-whether-or-not-to-pay-75k-to-enter-nations-pride-in-epsom-derby-today/