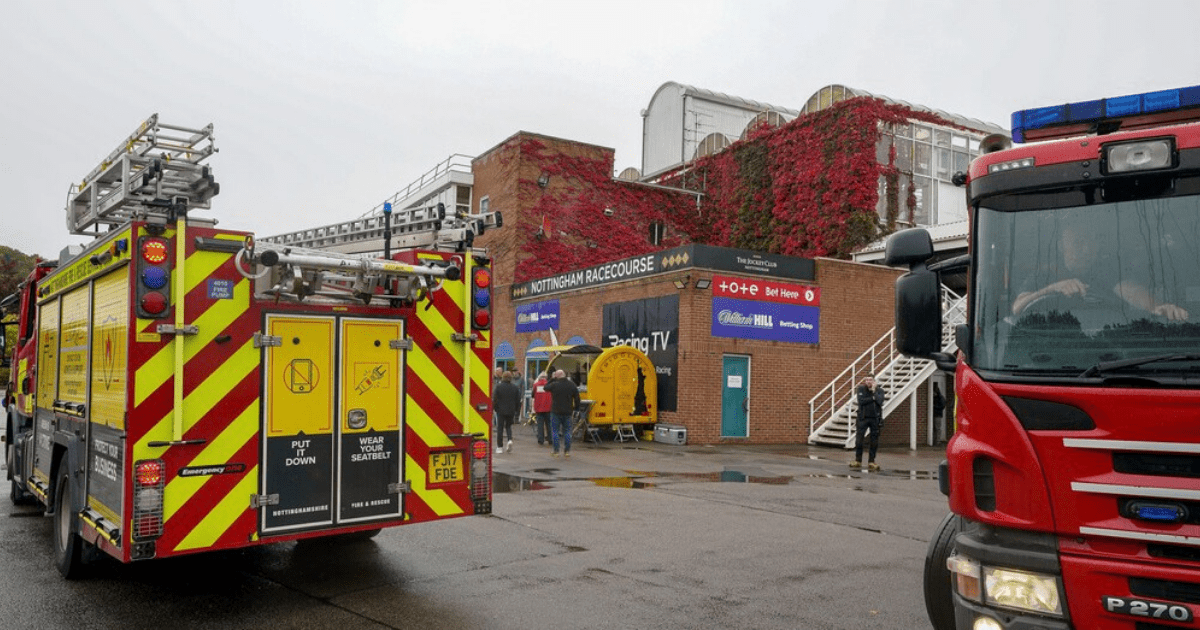 FIRE engines rushed to Nottingham racecourse and punters, trainers and stewards were forced to evacuate the stands in pre-race chaos.

A fire alarm was sounded in the Centenary stand at around 1pm on Wednesday.

Punters, trainers and stewards were forced to evacuate the stand

Two fire engines raced to the scene as those in attendance were hurried to safety outside.

Mysteriously, no fire was found on the premises and the drama seemed over as soon as it had begun.

There was a slight delay to racing, with the first race scheduled for 1.30pm going off just after 2pm.

Tom Ryall, Nottingham’s clerk of the course, confirmed the situation was soon brought under control.

He said: “The fire alarm went off in the Centenary stand, where the stewards and jockeys are based, so it became an integrity issue as well as safety.

“The stand was evacuated, the firemen found the alarm that detected the smoke, did a thorough check and could not find a fire.

“They reset the fire alarm system and it has not gone off since, so the fire brigade are happy for us to start racing.”

This was the latest bizarre incident to affect a meeting in recent weeks.

At Worcester last month two flights of jumps had to be bypassed due to a huge swarm of bees setting up camp near them.

A race at Kelso was delayed when the arrows indicating a hurdle was to be missed were put in facing the wrong way so riders couldn’t see them.

And a jump with cones placed in front of it – indicating it was to be omitted – at Wincanton yesterday was still jumped by riders.

Did you miss our previous article…
https://www.sportingexcitement.com/horse-racing/christophe-soumillon-sacked-from-500000-job-as-boss-aga-khan-tears-up-contract-after-rossa-ryan-elbow-video/

In this article:fireengines, forced, punters