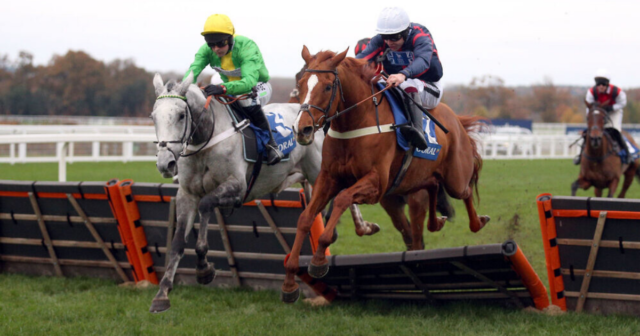 THE meat of the festive racing schedule is almost upon us but there’s plenty of quality action to enjoy before Boxing Day.

With the two-day International meeting at Cheltenham beginning on Friday and Grade 1 action from Ascot next weekend, racing fans have plenty to sink their teeth into.

Song For Someone (right): could return to defend his International Hurdle crown

Here we list five horses to consider when building your pre-Christmas punting portfolios.

There’s still a feeling we may not have seen the best from Zanza, who could line up in Cheltenham’s Racing Post Gold Cup (1.50, 11 December).

The form of his third in the Haldon Gold Cup at Exeter earlier in the season took a bit of hit when Eldorado Allen found the pace too hot in the Peterborough Chase last time.

That said, the second, Hitman, has since run second in a Grade 1 and I remain convinced Zanza has a big handicap in him.

He stayed on well to finish sixth in a ferociously run Paddy Power Gold Cup when last seen and runs off what still looks to be a workable mark of 145.

Winning big Cheltenham handicaps requires a bit of luck but if things fall Zanza’s way he’s got the tools to get the job done.

This six-year-old created a serious impression on his debut over fences at Lingfield last month and holds an entry for the Grade 2 December Novices’ Chase (2.05, 11 December) at Doncaster.

His form in novice hurdles was good despite only winning once but if his first chase start is anything to go by it’s over fences where we’ll see him at his best.

His jumping was neat and accurate for the most part and the way he eased away from his rivals that day suggested he was bound for a far higher grade.

These are exactly the types of horses Nigel Twiston-Davies excels with and I fully expect him to put up a big performance this weekend.

The winner of last year’s International Hurdle (3.00, 11 December) at Cheltenham returns to defend his crown this year with a cracking chance.

He was second on his reappearance in a Grade 2 at Ascot last month, only finding top stayer Buzz too strong in the closing stages over 2m3½f.

He should certainly come on for that run and connections will be hoping for at least some rain to take the sting out of Cheltenham’s ground.

If it arrives, he should have favourite’s chance of repeating last year’s exploits.

Despite him being often unreliable, I think Sporting John represents an intriguing punting proposition in Ascot’s Long Walk Hurdle (2.25, 18 December).

His chasing career last season ranged from sublime to dreadful but we should see a much more consistent horse now he’s been switched back to hurdles.

He took advantage of an attractive mark on his seasonal reappearance over the smaller obstacles at Cheltenham but more importantly he proved he stayed three miles.

This is a horse with proven Grade 1 ability if he pulls everything together and I think he’s sure to go off overpriced for this.

This recent French recruit to Gary Moore’s stable could well be smuggled into the Betfair Exchange Handicap Hurdle (3.35, 18 December) at Ascot off a feather weight.

He’s only a four-year-old, which means a big-field handicap will offer a serious challenge, but the manner of his win at Fontwell earlier this season suggested a revised mark of 128 still seriously underestimates his ability.

The key for him will be soft ground, so don’t be surprised if any deluge leads to his price contracting considerably before next Saturday.