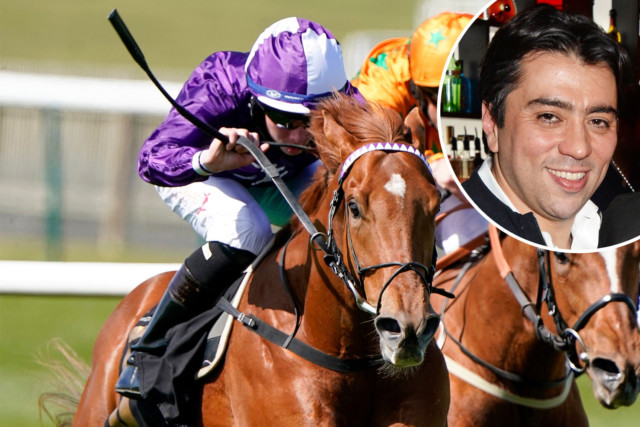 FOOTBALL agent Kia Joorabchian cheered home a winner in his colours at Newmarket on Tuesday – and is now dreaming of donning top hat and tails at Royal Ascot in June.

His Forca Brasil, trained by the in-form George Boughey, made an impressive winning debut in the British EBF Novice Stakes at Flat HQ.

Forca Brasil made a winning debut on Tuesday

The horse was short of room when beginning his challenge, but quickened up smartly when finding a gap to win a shade cosily at odds of 4-1.

Forca Brasil was due to make his debut in the Brocklesby Stakes at Doncaster last month but was a late withdrawal on veterinary advice.

But he was A1 for his belated first appearance and he looks to have speed to burn – and the Group 2 Norfolk Stakes at Ascot is under consideration.

Joorabchian said: “We were ready for the Brocklesby but events took their place and he couldn’t run there.

“But that may have favoured us as it gave us that bit more time for him to settle down and he looked great today.

“He has got a lot of speed behind him. He is bred for speed being by Cotai Glory.

“He is bred really well. Hopefully he will be a good horse and lead us into more fun things to come.”

“It is still a little bit of way to go to Ascot but that is the aim and we are always trying to get there.”

Boughey added: “He has worked a few times here and it has been good. He looks a Norfolk horse probably, but he has done it nicely today.”

Joorabchian, whose clients include Brazilian stars Philippe Coutinho and Willian, has plenty of success on the track since delving into horse ownership.

His purple and white colours, running under the banner of AMO Racing Limited, won were carried to victory 20 times last year.

He also owns the exciting Baradar, who is trained by Roger Varian and is a lively outsider for next months’s 2000 Guineas after a fine third in the Vertem Futurity Trophy in October.