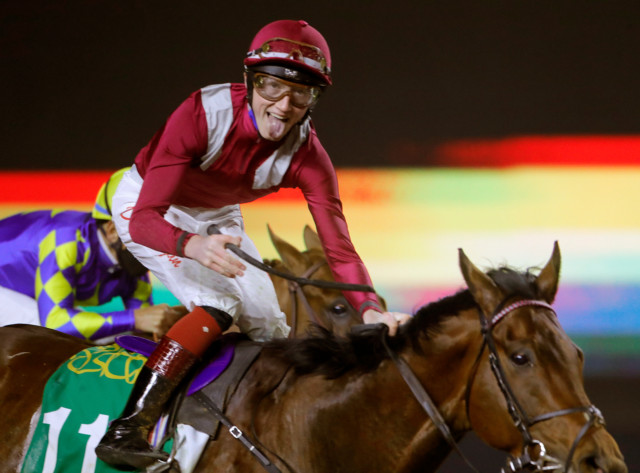 FOUR big chances for Saturday’s Coral-Eclipse at Sandown have pulled out – leaving just seven to run.

The remaining shortlist is headed by £10million wonderhorse Mishriff, who won the world’s richest race earlier this year.

Mishriff, the £10m wonderhorse, heads the field for Saturday’s Coral-Eclipse

But out of the Group 1 contest are runaway Oaks winner Snowfall, Lord North, Love and Mohaafeth.

Mishriff has already landed top-tier prizes in Dubai and France.

Victory in the Saudi Cup scooped connections £2,189,781 – although jockey David Egan was fined £71,000 for breaking whip rules in the race.

Egan retains the ride on Mishriff for the Sandown stunner, where the winner will land £340,260.

And Mishriff rightly heads the market at 13-8 with St Mark’s Basilica – one of three Aidan O’Brien runners – coming in second fav at 7-4.

Recent Royal Ascot winner Wonderful Tongiht comes in at 8-1 after previously being 25-1.

While O’Brien’s Armory and Japan occupy the next spots in the market on 12-1 and 20-1 respectively, with El Drama last of the lot at 33-1.

Lord North was a notable absentee from Ascot too, with Gosden senior confirming he has since picked up a throat infection.

He said: “Lord North will not run in the Eclipse as he has a throat infection.

“Unfortunately he didn’t get his ground at Ascot so this further hiccup is frustrating. Mishriff will be our only runner.”

Palace Pier, Mother Earth, Bolshoi Ballet and John Leeper are among the other horses who will skip the event, although their omissions were expected.

Commenting on the market, Coral’s David Stevens said: “In the absence of Lord North, who had been backed into 6-1 for Saturday’s race, this year’s Coral-Eclipse market is dominated by the last two winners of the Prix du Jockey Club, with the year-older Mishriff just shading favouritism at 13-8, ahead of this year’s Chantilly winner, St Mark’s Basilica, at 7-4.

“Of the rest, both Addeybb and Wonderful Tonight could both shorten in the betting should plenty of rain fall over Sandown this week.”