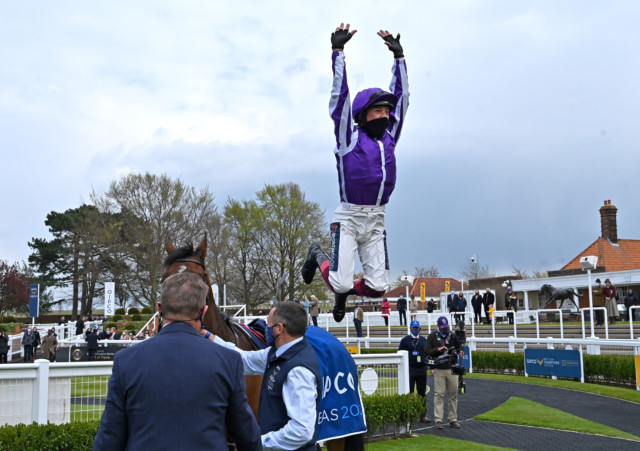 Presenter Ed Chamberlin had to cut his final address to viewers and explain the shouting they could hear in the background was the 50-year-old legend.

Still flying at 50, Dettori does his trademark flying dismount off Mother EarthDettori has done it all in his career but you can see how much winning the 1000 Guineas means to him

Dettori was pumping the air and whooping after claiming the £212,663 first-place prize for acclaimed Irish trainer Aidan O’Brien.

The iconic jockey, who shows no signs of slowing down in his 50th year, saw off pre-race favourites Santa Barbara and Alcohol Free.

Both had come in for a tidal wave of market support prior to the off but failed to crack the top three.

Saffron Beach came second at odds of 9-1 while 22-1 outsider Fev Rover hung on for a brilliant third.

But the moment belonged, as it so often does, to Dettori.

The win was particularly poignant coming just 24 hours after his disappointment on Battleground in the 2000 Guineas.

Dettori, who could not stop whooping in his immediate post-race interview, said: “We can still do it. It’s my 20th Classic so I am delighted to win it in my hometown of Newmarket.

“Aidan gave me a lot of confidence. I kicked at the top of the hill because I knew she’d get home, and she did.

“I was able to enjoy it.

“She’s very brave. She’s not very big but she’s got a big engine.”

Asked by SunSport’s Matt Chapman about still going at 50, Dettori said: “I love it.

“I was a bit deflated yesterday with Battleground but when you ride in the Classics for Coolmore on the second or third string you have a live chance and in the back of mind I thought anything is possible.

“Woohoo! Come on the oldies!”

ITV pundit Jason Weaver commenting on Dettori’s celebrations said: “He is loving it at his home track!”

And in front of the cameras, Dettori roared: “Come on!”

Dettori won the day after 54-year-old Kevin Manning rode 16-1 Poetic Flare to victory in the 2000 Guineas.

A good weekend’s work for the old timers with a combined age of 104.