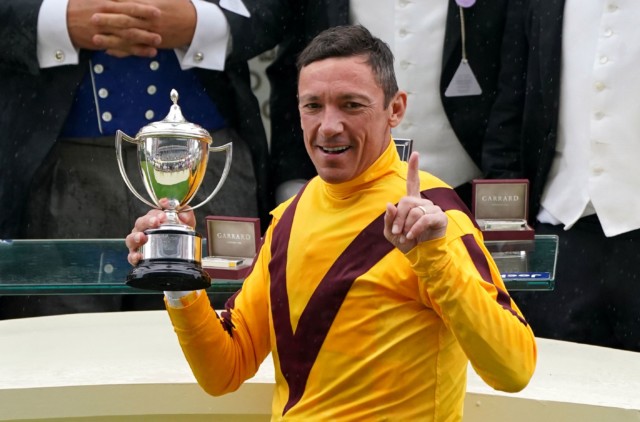 LEGENDARY jockey Frankie Dettori admits time is running out to win the July Cup – the only British Group 1 that has eluded him.

The Italian had his first ride in the valuable sprint in 1990 – finishing seventh on 33-1 shot Lugana Beach.

And he has been unable to crack the race in three decades since – with his second on the ill-fated Sceptical last season as close as he has come.

This year here rides the US sprinter Extravagant Kid, who is a 20-1 shot with Paddy Power.

The Brendan Walsh-trained speedster won the Group 1 Al Quoz Sprint in Dubai before a fine third in the King’s Stand Stakes at Royal Ascot 25 days ago.

He was two lengths behind Oxted at the Royal meeting – and Dettori views the 4-1 favourite as the one to beat again.

Dettori said: “The July Cup is one of the few big prizes that’s eluded me for the whole of my career, and I’ve got to win it soon as I’m running out of years!

“We’re going to give it a go with Extravagant Kid, who’s not overly fancied in the market and has a bit to find with Oxted after the King’s Stand as he absolutely trounced us.

“Brendan [Walsh] has decided to keep him over here and go for this race as he feels he might be better over 6f, so you never know.

“It’s going to be a big field, which usually means you get a truly run race, and that will suit Oxted as he likes to relax and be dropped out a bit. There’s no doubt he’s the one to beat.”

He said: “He ran his race at Ascot and we were very pleased to run third in a race like that.

“Maybe if he’d been drawn on the nearside it might have helped, but I’ve no excuses. If he runs as good as that, or maybe a little better, I think it should put him in the mix.

“He’s done great over here and looks fantastic. I’d forgotten what a great environment Newmarket is for a horse and he’s thrived.

“Frankie was keen to ride him again and there’s nobody better, so we look forward to it.”