Frankie Dettori can add a few more Ferraris – including ultra rare F50 – to collection with £850,000 win this weekend
Advertisement 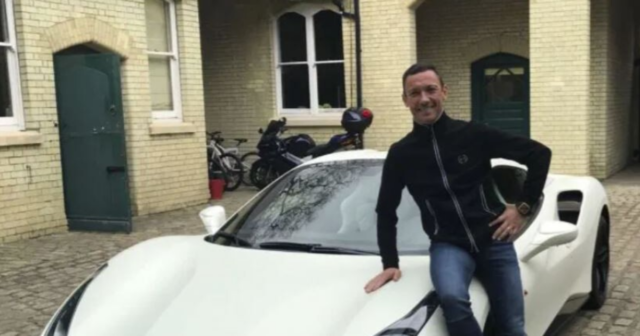 FRANKIE DETTORI is eyeing up a bumper payday this weekend – which would bring in so much cash he could even add an ultra rare Ferrari to his collection.

The world’s most famous jockey has an absolute blockbuster book of rides from Friday to Sunday.

Italian Dettori is a lover of Ferraris, keeping his collection, which includes a £190,000 488 Spider, in a heated garage at his country mansion.

But his rides this weekend are so valuable that victory would no doubt have the petrolhead dreaming of purchasing the elusive Ferrari F50.

Just 349 of the luxury supercar were ever made and their rarity means they have gone up in value as time goes on.

But before icon Dettori, 50, can think of adding to his collection – which has included a Ferrari 430 Scuderia, 360 Spider and 360 Modena – he first must win this weekend.

Dettori is booked to ride super-stayer Stradivarius in the 2m2f Doncaster Cup Stakes.

The Bjorn Neilsen-owned seven-year-old has alrady won more than £5m during his career.

Dettori returns on Saturday with another red-hot favourite in the shape of The Queen’s Reach For The Moon.

WINNER FOR THE QUEEN

Installed at the mega short price of 5-4, a win for Dettori on the John and Thady Gosden-trained two-year-old will land £71,336.

Next comes the big one, the St Leger.

Although not confirmed, Dettori, whose daughter Ella raced at Glorious Goodwood, is set to get the leg up on Aidan O’Brien’s High Definition, who has been entered into the race at a cost of £50,000.

A seventh win in the Leger would net Dettori and connections a whopping £421,355.

The jockey will then hot step it over to France on Sunday where he is set to be reunited with Snowfall at Longchamp.

The runaway Epsom Oaks winner and Arc de Triomphe favourite runs in the Prix Vermeille at the Paris track.

Victory in the contest won by Tarnaway last year could net Dettori another £295,000.

Of course the jockey only gets a share of the winnings, but Dettori will fancy his chances of scooping the whole £850,000 on four highly fancied runners.

Dettori – who famously survived a plane crash – has spoken of his love of fast cars in the past – but admitted he had to sell one of his ‘frightening’ Ferraris.

Talking about his 430 Scuderia, Dettori said: “I didn’t realise when I ordered it that it’s a racing car with a number plate.

“It had really uncomfortable bucket seats and I had to sit on a cushion just to see over the steering wheel.

“That car was a beast. It has carbon-ceramic brakes, unbelievable g-forces when cornering.

“Every time I drove it I got bruises.

“It frightened me so I got rid of it.

“I’m very happy to be a Ferrari owner once again, but with one that’s a bit tamer and with comfy seats.

“I only take it out when it’s dry and I keep it in a special heated garage.”

Just 349 of the ultra rare Ferrari F50s were made and they go from around £350,000 to £2.2m in cost – could Dettori buy one with a massive weekend of winners?
Advertisement. Scroll to continue reading.

Did you miss our previous article…
https://www.sportingexcitement.com/horse-racing/trainer-whacked-with-three-month-ban-after-shocking-facebook-post-after-a-couple-of-beers