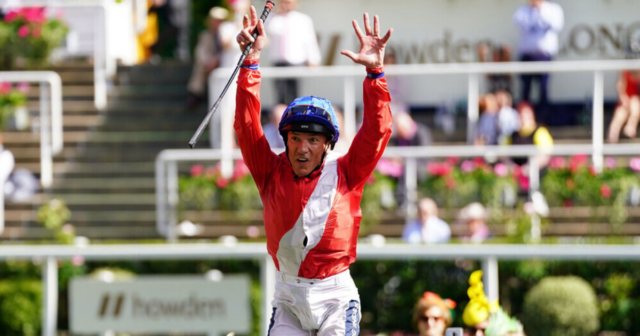 FRANKIE DETTORI hailed Inspiral a “true champion” after she battled to Group 1 glory in Deauville.

The Italian steered the three-year-old filly to beat the boys in the Jacques Le Marois for his gaffer John Gosden.

The Cheveley Park homebred was sent off a 7-4 shot and kept David Simcock’s Light Infantry at bay in the dying strides by a neck.

She proved her Falmouth Stakes flop, when stuffed at 1-7, was just a bad day at the office as hot favourite and 2000 Guineas winner Coroebus was stuffed back in fifth.

Dettori, 51, said: “We were scratching our heads after Newmarket, after her fantastic performance in the Coronation at Royal Ascot.

“She was taking on a Guineas winner and proper horses here. She showed today that she’s a true champion.

“She was champion two-year-old and she’s back. I’m thrilled for the Thompson family and I’m delighted she’s bounced back to her best.”

Inspiral was cut into 4-1 from 5-1 for the QEII at Ascot on Champions Day and Gosden indicated that could be her end of season target.

She was also made the 7-4 favourite for the Sun Chariot Stakes at Newmarket on October 1.

The Newmarket handler said: “She had cover, she relaxed and she actually hit the front too soon but that was the jockey’s decision.

“The last race was a blip but we can see where we go now.

“We could maybe go to Newmarket for the Sun Chariot or there is the QEII a bit later.”