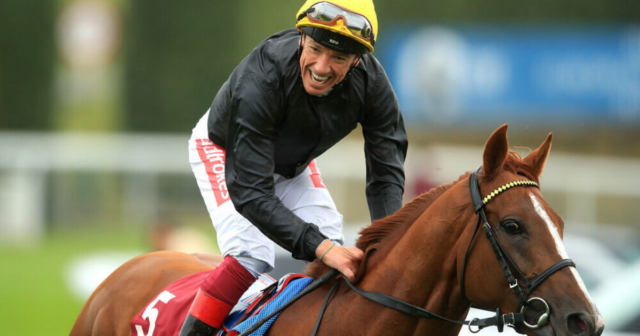 FRANKIE DETTORI’S incredible partnership with superstar stayer Stradivarius looks well and truly over ahead of the horse’s final run at York.

Legendary jockey Dettori and Strad have formed one of racing’s most amazing double acts.

But amid a tumultuous season in which he was briefly axed by trainer John Gosden, the Italian was also booted off Bjorn Nielsen’s wonderhorse.

Dettori cheered on Stradivarius as he chased a fifth Goodwood Cup with Andrea Atzeni doing the steering at the Goodwood track last month.

They lost to Kyprios, Aidan O’Brien’s new star of the staying division in an all-time thriller.

Kyprios won’t be on the Knavesmire and with Britain basking in another heatwave it looks like the track could be too firm for Trueshan.

Stradivarius is currently the overwhelming 5-4 fav to claim the title for a fourth time.

But again he looks all set to race with Atzeni in charge – and Dettori watching on.

Dettori came in for criticism from Gosden and Nielsen after Stradivarius’ third-place finish in the Ascot Gold Cup.

Speaking prior to his Goodwood Cup run, Nielsen said: “Frankie Dettori, who has enjoyed a great relationship with Stradivarius and ridden him to many brilliant stakes victories – more than he has any other horse – will by mutual agreement give up the ride to Andrea Atzeni in the Goodwood Cup.

“Frankie remains not only ‘the Strad’s’ biggest fan but a very good friend.

“I look forward to seeing him continue his phenomenal career as one of the greatest big-race jockeys of all time.”

Did you miss our previous article…
https://www.sportingexcitement.com/horse-racing/punters-blast-new-cheltenham-festival-rule-brought-in-after-willie-mullins-winner-as-bha-say-it-will-boost-fairness/