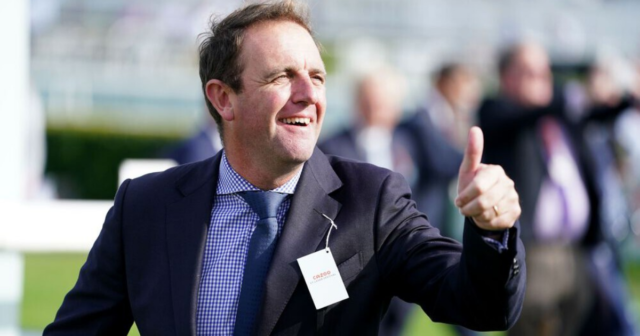 FRANKIE Dettori’s decision to head to Canada paid off by the bucket load as Godolphin landed a near £1 million global double.

Stars Yibir and Walton Street flew the flag for the boys in blue as Charlie Appleby’s fine campaign continued in style.

Dettori skipped the chance to ride in the UK over the weekend for a shot at the riches on offer in Canada.

And the 50-year-old cashed in as Walton Street streaked to a five length victory in the Canadian International from fellow British raider Desert Encounter in second.

It was a fourth victory for globetrotting Dettori in the famous race.

And Newmarket trainer Charlie Appleby quickly had another reason to cheer as his Yibir made it a quickfire double just ten minutes later.

No contest! Walton Street and @FrankieDettori put on a show to win the Grade 1 Pattison Canadian International at @WoodbineTB for Charlie Appleby and @godolphin! pic.twitter.com/AAbzY7ix7A

For much of the £725,000 race jockey Jamie Spencer and Yibir looked as if they’d do well to finish.

But as the pair clicked in the long Belmont straight, Yibir powered through the line to take the spoils.

Electric stuff from Yibir and @JPSpencer1980 in the $1m Jockey Club Derby Invitational at Belmont!

Appleby and Dettori team up again at Woodbine this evening with Albahr and Wild Beauty both going for Grade 1 glory and £250,000 pots.

Wild Beauty will aim to win a second Natalma Stakes for Appleby, while Albahr goes in the Summer Stakes.

Did you miss our previous article…
https://www.sportingexcitement.com/horse-racing/wealthiest-horse-racing-owners-from-the-secretive-chanel-brothers-worth-19billion-to-the-ruler-of-dubai-and-the-queen

In this article:Epsom, Frankie Dettori, Newmarket