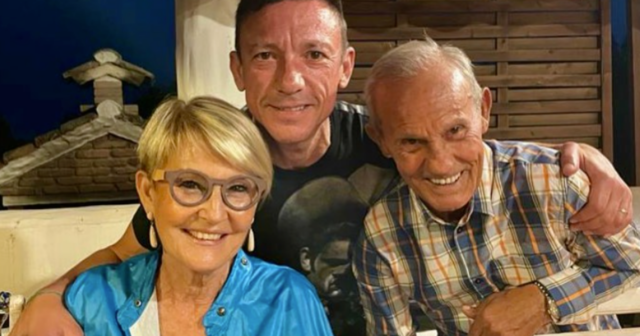 FRANKIE DETTORI jetted off to Sardinia to be with his dad amid the fallout from being axed off key rides by trainer John Gosden.

But on his return today he is set for showdown talks with the legendary trainer about what the future holds.

Gosden’s decision to replace Dettori, 51, on horses he usually rides this weekend has sent shockwaves through the sport.

It comes on the back of Dettori’s nightmare aboard Stradivarius in the stayer’s quest for a record-equalling fourth Gold Cup at Royal Ascot last week.

And Dettori getting turned over on the Queen’s odds-on fav – and best chance of a winner – Reach For The Moon during the same week.

The iconic Italian was a runaway winner on superstar filly Inspiral in the Coronation Stakes for Team Gosden.

But that only slightly softened the blow on a week that promised so much but resulted in just one victory for the king of the course.

In Dettori’s book Leap, he often writes of how he retreats to Sardinia during tough times to get away from it all and reset.

In 2017 he jetted off there to recover from an injury that saw him abandon his Royal Ascot book of rides.

He said ‘everything I touch turns to s***’ as more of his rides seem to go to Jamie Spencer.

It’s during this time he says again he goes to Sardinia to have a ‘heart-to-heart’ with his dad.

Dettori said: “For all the strife between us sometimes, he’s the one guy I really need to talk to at times like this.”

It can be seen as significant, then, that Dettori posted on Instagram a photo alongside his father Gianfranco.

Bookies think Hollie Doyle – a French Classic winner aboard Nashwa for Gosden last Sunday – is nailed on to replace Dettori as Gosden’s No1.

James Doyle gets the ride on Sunray Major – a horse Dettori has ridden all but once – in the 3.15 at Newmarket tomorrow.

While Gosden’s normal No2 Rab Havlin has been booked for Stowell.

Dettori’s only ride on Saturday will be aboard 5-1 Lezoo in the 2.05 at Newmarket.

Gosden told the Racing Post on Friday morning: “Frankie was in Italy for a wedding in the week before Royal Ascot.

“Obviously he was at Ascot all last week and he then went to Sardinia after racing on the Saturday.

“I assume he will be back in the UK today when I will be able to see him for a meeting.”

Dettori’s manager Peter Burrell admitted he and the jockey were ‘in the dark’ about Gosden’s decision to axe him.