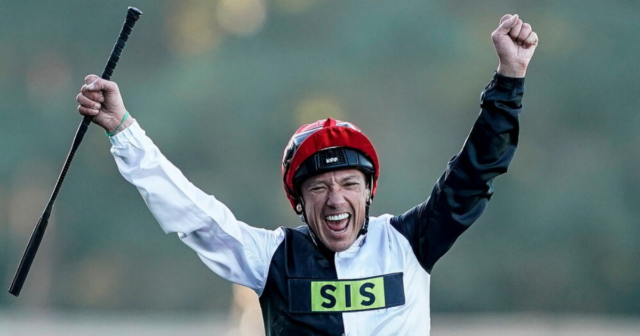 FRANKIE DETTORI and John Gosden are back together – but will one of the legendary trainer’s horses give the Italian his best chance of victory?

Dettori has a busy few days ahead of him after Gosden confirmed their 11-day ‘sabbatical’ is over.

Will Dettori be celebrating at Newmarket in the July Festival?

The jockey, 51, was riding work on Emily Upjohn at Newmarket early Tuesday morning ahead of her tilt at the Irish Oaks.

Dettori kicks off his globe-trotting tour with a ride on 9-4 Apache Spark at Kempton on Wednesday evening.

You wouldn’t expect to see Dettori getting to grips with a Class 4 runner on the all weather, but Apache Spark is owned by Marc Chan, Dettori’s big mate.

The horse is currently second favourite behind George Boughey’s Kinta, who will be ridden by Will Buick.

Dettori really gets going at HQ on Thursday.

A 16-1 shot at the time of writing, New Mandate, also owned by Chan, appears to have it all to do.

Although the last time Dettori rode the four-year-old gelding they beat Sir Busker in a Listed contest over a mile at Ascot.

That race is at 3.35 and it is at 4.10 that Dettori and Gosden could team up for their first winner back together.

This son of Ulysses went down just under a length to Coroebus at Royal Ascot and before that was a narrow loser to the progressive Whoputfiftyinyou.

After those two rides on Thursday, Dettori kicks off Friday on Hope You Can Run in the opening race at Newmarket before riding outsider Knightswood in the next.

He will then look to extend Lezoo’s winning run to three in the 2.25 Duchess of Cambridge Stakes.

If Mighty Ulysses doesn’t get the job done then you have to think Inspiral almost certainly will in the Falmouth Stakes.

The unbeaten filly is every inch the superstar and is odds-on to the tune of 2-7.

Victory in the Group 1 is worth £140,000 to connections – but Frankie won’t put a price on being back aboard Gosden’s top horses.

After that race it will be a frantic dash to the airport for two rides at Belmont Park on Saturday.

Godolphin’s With The Moonlight will run in the Invitational Stakes over 1m2f while Nations Pride will take on the likes of Machete – a recent loser to Coral-Eclipse winner Vadeni – in the Derby Invitational later in the card.