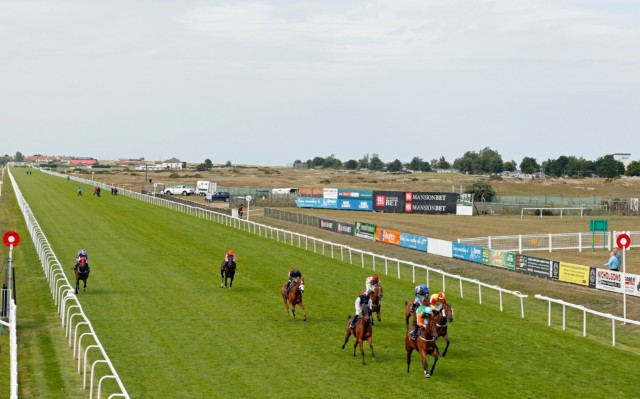 RACING chiefs have switched Friday’s meeting at Yarmouth to Wolverhampton.

The move is being labelled as ‘precautionary’ after Monday’s card was abandoned due to a patch of false ground.

The Amy Murphy-trained runner Lord Chapelfield suffered a fatal fall around half a furlong from home in yesterday’s 3pm race.

Jockey Gabriele Malune was knocked unconscious following the incident and taken to hospital, though he was later discharged.

Following a lengthy delay and an inspection by a delegation of officials, the decision was taken to abandon.

And with an investigation into the state of the racing surface at Yarmouth ongoing, the BHA are taking no chances.

A statement read: “The fixture scheduled to take place at Great Yarmouth on Friday 7 August will be transferred to Wolverhampton racecourse.

“This is as a precautionary measure whilst further assessment takes place to assess a portion of the racing surface in the home straight following a faller at the fixture on 3 August.

“The fixture at Wolverhampton will be an evening eight-race card. The races will be as close as possible to those originally scheduled at Great Yarmouth.”

Yarmouth is owned by Arena Racecourses (ARC), and their racing director Jon Pullin is hopeful this will be the only meeting lost at the course.

He said: “Following yesterday’s mid racing incident at Great Yarmouth, we have undertaken a thorough inspection of the whole track with senior racecourse officials and the BHA Inspectorate.

“Whilst nothing has come to light from this inspection, including any false ground, we will, in conjunction with BHA, move the fixture scheduled for Friday 7 August to Wolverhampton, before we resume racing at Great Yarmouth on Tuesday 25 August.”