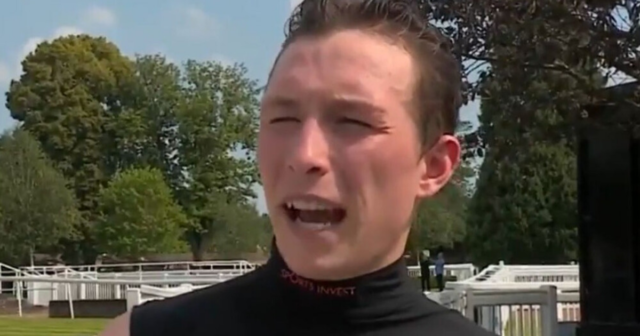 A FURIOUS jockey has hit out at being disqualifed and banned after he lost weight sweating during the summer heatwave.

Jason Watson blasted the ‘extremely harsh’ punishment dished out following a race at Lingfield on Wednesday.

Watson thought the DQ, ban and fine for the trainer after he lost 2lbs was ‘extremely harsh’

Watson came second in a 1m4f contest on 6-1 shot Tindrum, landing connections a runners-up cheque of £1,344.

But the jockey was stripped of his finish and prize money, and the horse’s trainer Heather Main fined £500, after he weighed in light following the race.

All jockeys weigh in before and after a contest.

The jockey put the difference down to weight lost sweating as Britain basked in temperatures exceeding 30C.

Watson said: “I don’t need to tell anyone that it’s a very hot day and when I weighed out, I was flickering on the right weight anyway.

“I feel as though it was a bit unfair, but I feel more sorry for Mrs Main and the owners because it’s hard enough to get anything out of this game after the pandemic.

Hard done by? After weighing in at 9st4lb having weighed out at 9st6lb, @Jason7Watson1's mount Tindrum was disqualified at @LingfieldPark, with the rider telling @hayleyjanemoore that the change could be due to sweating.

He was banned for two days. Heather Main was fined £500. pic.twitter.com/sfZiamzI9X

The stewards’ report read: “It was noted that despite the warm conditions all other riders that were required to weigh, weighed in either at the same weight, or slightly heavy, but still within the allowable parameters.

“As the stewards were unable to establish an explanation for the weight difference, Watson was suspended for two days and Main was fined £500.”

At least Watson ended the day on a good note, though, guiding 4-1 Salsoul to victory in a 6f contest worth £2,862.

Did you miss our previous article…
https://www.sportingexcitement.com/horse-racing/racing-league-meet-star-studded-teams-including-frankie-dettori-vs-charlie-austin-and-alan-brazil-vs-hayley-turner