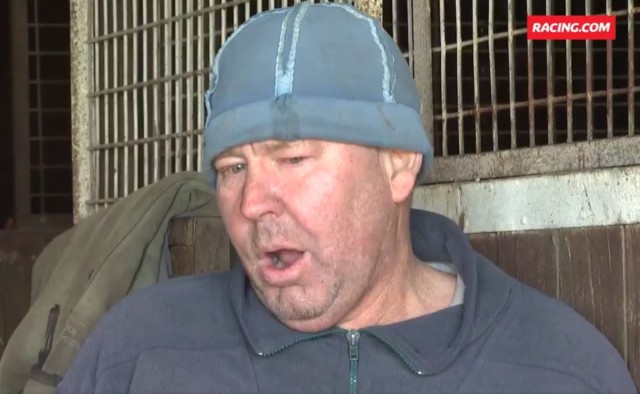 A FURIOUS racehorse trainer has denied telling a vet: “I’ll put the bloody horse down then put you down.”

Bryce Stanaway had a confrontation with a racecourse vet after one of his horses was given immediate treatment when pulled up in a race last year.

Dr Chris Heislers claims he heard Stanway threaten to shoot him after he had sedated the injured horse.

Dr Heislers told the Victorian Racing Tribunal in Australia: “I vaguely remember him saying he would shoot me or the horse or something along those lines.

“I can’t remember a lot of the specifics in regards to the words he used.

“He was very upset. He was very aggressive and intimidating and at one point in time came up close into my face.

“I can’t remember a lot of the actual words that were used. I was focusing on the injured horse.

“He was running up from the horse area, the mounting yard, up the straight and I could hear someone shouting.

“He was angry, frustrated. I asked him who he was.”

Barrier attendant Daniel Baxter was quizzed during the tribunal about what he allegedly heard the trainer say, report racing.com.

Baxter told the tribunal: “He was doing a little bit of swearing and things like that. He wasn’t happy with what was happening.

“I don’t think in the heat of the moment he meant it this way but he said, ‘I’ll take the bloody horse home and put it down then put you down’.”

Stanaway denied making the kill threat and said: “I didn’t say I was going to shoot you or put you down.

“I said I’d be better off shooting the horse.

The trainer, left, is a straight talker but denied the allegations

“I hope we’ve got that straight that I didn’t want to put you down.”

Stanaway alleged ‘acts of cruelty’ were committed on his horse Moorabool in the incident at Bendigo racecourse last October.

The trainer said the horse has since recovered and been rehomed, and added: “I am a horse lover, not a horse killer, my horses come first.”

The hearing into charges including allegedly using threatening and abusive language, of intimidation, of engaging in abusive conduct and the obstruction of veterinary stewards in performing their duties, continues.

It comes after New Zealand jockey Jason Waddell was banned for ten years for threatening to kill a racing official.