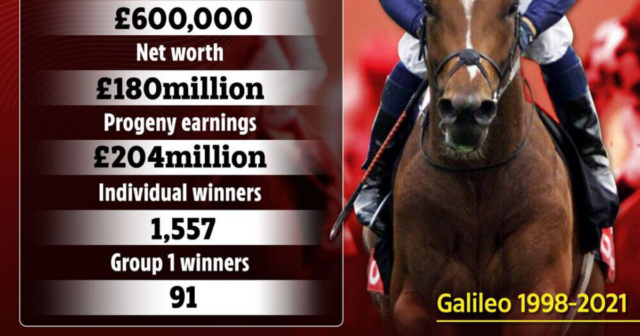 THE horse racing world lost a giant with the tragic death of Galileo.

The world champion sire, who could count the Epsom Derby among his wins as a horse on the track, was worth close to half a BILLION quid off it.

Covering 120 a year – at least, during his prime years – brought owner John Magnier, a former Manchester United shareholder, an astonishing £72million every 12 months.

Factor in progeny earnings of £204m [to date, and still rising] and £1.6m from his performances on the track, and Galileo is set to easily surpass £400m in career earnings.

With sons and grandsons winning top-class races on a consistent basis all over the world, he could quite conceivably hit the £500m mark in career earnings.

As the world’s dominant sire responsible for 91 Group 1 – like the Champions League of horse races – winners at the time of his passing aged 23, Galileo was the dominant stallion in the world.

In fact, the only horse who really looks close to matching his incredible exploits is Frankel.

The highest rated horse ever, Frankel, who never lost in 14 races, was the son of… you guessed it, Galileo.

With bloodlines so closely matched in horse racing and billionaires willing to pay mega bucks for the next big thing, it’s no surprise Galileo was the go-to stallion for the best part of 15 years.

Galileo was arguably the most iconic racehorse of all time

The £72m figure – put in a wider sporting context – is treble what Manchester United superstar Paul Pogba makes every year, according to Forbes, who say the World Cup winner makes £24m a year.

Worth £180million at the peak of his powers, Galileo was more valuable than the current transfer market values of Cristiano Ronaldo, Lionel Messi and Kylian Mbappe.

According to transfermarkt.com, the Paris Saint-Germain striker and French World Cup winner is the most expensive player on the planet.

But even he, with an estimated market value of £137m, can’t match Galileo.

And, really, that jaw-dropping figure is the just the start of it when it comes to Galileo.

He has been the father of a combined 1,557 winners in individual races.

Oh, and he wasn’t too bad on the track himself, scooping £1.6m for connections.

All other sires, Frankel included, will be measured against the immortal Galileo.

He only raced eight times.

But that was enough to cement his status as a great – his career off the racecourse sending him into the stratosphere.

No wonder iconic trainer Aidan O’Brien put Galileo is on a pedestal above all others.

The Ballydoyle trainer said: “He was unique and we will never see the like of him again.”